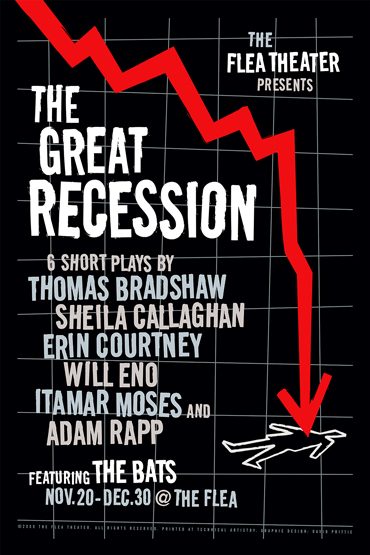 “One Man’s Rotten Economy Is Another Man’s Inspiration. Discuss. So it goes in the days of “The Great Recession,” as some have called the global economic doldrums of the last year. The Flea Theater has borrowed this catchy sobriquet for a collection of new short plays inspired by our annus horribilis, with contributions from Will Eno, Adam Rapp, Itamar Moses and others.” – Charles Isherwood, New York Times

“A definitive meditation on the zeitgeist of our cash-strapped nation. [The plays] hum with a vibrancy and immediacy that demands contemplation long after the house lights have risen. Whether or not our economic woes will see a turnaround in the near or far future, or whether we as a people will learn from history, remains to be seen, yet the prospects after an evening with the Bats seem a little brighter!” – NY Theatre

“The Great Recession is certainly a bargain. Sporting six one-act plays and a cast of more than 50, this program offers plenty to chew on! Played with great energy and specificity by the Bats, the plays are fast and furious snapshots of the effects of the world economic downturn. The many Bats spread their wings and soar.” – Backstage

“Jim Simpson should be congratulated for corralling six of the city’s best rising playwrights to tackle the subject head-on! The show begins strongly with shorts about the ethical effects of having or lacking money: Adam Rapp’s agitprop Classic Kitchen Timer stages a demented game show in which impoverished people can win thousands of dollars in exchange for murdering a baby; Itamar Moses’s Fucked adroitly captures the dynamics between a young woman and her trust-fund boyfriend; and Thomas Bradshaw’s amusing New York Living naughtily runs a red light at the intersection between sex and real estate. Sheila Callaghan’s Recess [is] an inventive postapocalyptic fantasia.” – Time Out

“Will Eno’s ruminative Unum and Thomas Bradshaw’s hilariously biting New York Living both mine new seams in the much-discussed terrain of the financial crisis. Eno help[s] build a better understanding of why we need money in the first place, and what our priorities should look like. [Recess by Sheila Callaghan is] enthralling to watch, especially when it’s simply a bunch of unhinged people going about their everyday business after the end of the world.- Variety

Tickets may be purchased by clicking the red TIX link at the top right of this page, or by phone: 212-352-3101. The play runs 1 hour and 50 minutes, with one intermission.

“While commercial theater ignores economic reality to sell tickets, The Flea and its resident company The Bats present The Great Recession, six one-acters that last ten minutes apiece. These topical and provocative plays about twentysomethings range from humorous quests for work and sex to a disturbing, not-so-distant future of human experiments after the “crash.” The emotional uncertainty within these works is crystallized in the final play Unum, which traces the money trail from the Federal Reserve and back. Artifice is completely swept away by the time these young, talented, and unpaid actors take their final bows.” – Flavorpill

“The Great Recession creates not only a collage of stories about economic hardship but a snapshot of how some of the country’s most talented playwrights respond, in their work, to crisis. One of the great pleasures of the evening is seeing each playwright’s signature style distilled into ten minutes.Courtney’s Severed infuses multifaceted impacts of the recession with a sweet human exchange. That’s one of the best things plays can offer crisis, and Courtney achieves it. [Thomas Bradshaw’s] plays are among the funniest, darkest work written today. Onstage, the Bats’ ease with one another makes a strong case not only for the benefits of the Flea’s program but for the high quality of work that a theater with a resident ensemble can achieve.” – OffOffOnline Read the full review HERE

“Each play is energetically performed by the large, attractive cast and is smartly staged with limited resources. [Fucked] is directed with flair and polish by Michelle Tattenbaum; Director Ethan McSweeney succeeds in helping the four characters [in New York Living] to tease the maximum laughs from the complications of their rehearsals and living arrangements; [Severed] is
smoothly staged by Davis McCallum.” – Curtain Up

“Itamar Moses’ Fucked is a nifty, nasty little comedy of manners about a couple breaking up. Moses has a sharp eye for male passive-aggressive behavior, and he ends the piece on a satisfying note of schadenfreude. Michelle Tattenbaum’s direction keeps the action perfectly taut. New York Living is an acidly funny cartoon. The plays are buoyed by the accomplished young cast. This may be the most talented group of Bats that Simpson has come up with yet, and I look forward to seeing them on many stages in the months to come!” – Lighting and Sound America

Best of the Blogs

Eye on the Arts writes “These playwrights come up with six distinct but equally compelling pieces ranging from the amusing, to the gruesome, to the utterly depressing. This writer was particularly impressed by the subtle cleverness infused into each work.” Read more HERE

City Scoops raves that “the plays are by turns surreally disturbing, delightfully comedic, and endearingly bizarre. Some exaggerate the recession to apocalyptic proportions, while others subtly study how relationships and emotions fluctuate in time with the stock market. All are imaginative depictions of how humans handle hard times.” Read her post HERE

Theatre Knights thinks you should “Beg, Borrow or Steal to see The Great Recession”. Read his thoughtful description HERE

The Flea commissioned six playwrights to create ten-minute plays exploring the impact of the current economic crisis on the younger generation. Presented under the title THE GREAT RECESSION, the evening features premieres by Thomas Bradshaw, Sheila Callaghan, Erin Courtney, Will Eno, Itamar Moses and Adam Rapp — all writers recently nurtured by The Flea. The plays are performed by The Bats, the resident acting company of The Flea.

FUCKED by Itamar Moses. Directed by Michelle Tattenbaum.
The offer of free trip creates havoc for a new couple, forcing them to ask: when are you making love and when are you just being screwed?
Cast: Dorien Makhlogi, Jessica Pohly
“Jessica Pohly and Dorien Makhloghi give this short, insightful scene plenty of passion and subtext.” – Backstage
“Rarely have words flowed from characters’ mouths so effortlessly that one truly forgets they are watching actors.” – Theatre Knights
“Impeccable chemistry between Pohly and Makhloghi” – City Scoops

SEVERED by Erin Courtney. Directed by Davis McCallum.
An unlikely romance springs up between a cynical artist and a straightforward businessman, while a cross-section of young New Yorkers are interviewed for a documentary on the recession.
Cast: Eboni Booth, Jake Green, Amy Jo Jackson, Turna Mete, Reynaldo Piniella, Ronald Washington.
“The likable ensemble lends warmth to each story, particularly Reynaldo Piniella in the role of an aspiring actor.” – OffOffOnline

UNUM by Will Eno. Directed by Jim Simpson.
The play about the dollar. From the board room of a diaper factory to the lunch room of a government currency printing facility, it is all about the power of $1.
Cast: Felipe Bonilla, Louiza Collins, Katherine Folk-Sullivan, Laurel Holland, Josephine Huang, Jonathan Marballi, Kate Michaud, John Russo, Emily Simoness, Chloé Wepper, Wilton Yeung, Marshall York
“Wilton Yeung as a cash-strapped new father and Katherine Folk-Sullivan as the equally down-at-the-heels flower seller are particularly moving.” – Backstage
“the Money Manager is played hysterically by Marshall York” – Theatre Knights

Thomas Bradshaw’s newest play, The Bereaved, premiered in New York in September 2009 at The Wild Project, and will be produced at The State Theater of Bielefeld in Germany in January 2009. He is currently under commission from The Goodman Theater, The Flea Theater, Theater Bielefeld(Germany), and Partial Comfort Productions. During his Guggenheim Fellowship term, he will be working in England and Germany on his new play about Queen Charlotte. Thomas’ plays are published by Samuel French Inc.

Sheila Callaghan’s plays have been produced and developed with Soho Rep, Playwright’s Horizons, South Coast Repertory, Actor’s Theatre of Louisville, New Georges, Woolly Mammoth, and Rattlestick, among others. Sheila is the recipient of the Princess Grace Award, a Jerome Fellowship from the Playwright’s Center in Minneapolis, a MacDowell Residency, the Susan Smith Blackburn Award, and the Whiting Award. Her full-length plays include Scab; Crawl Fade to White; Crumble (Lay Me Down, Justin Timberlake); Dead City; Kate Crackernuts; That Pretty Pretty or, The Rape Play; and Fever Dream. Sheila is a resident artist at HERE, a member of the Obie-winning collective 13P, and a resident of New Dramatists. Currently, she is a writer on the Showtime series The United States of Tara.

Erin Courtney’s plays have been produced or developed by The Flea (Kaspar Hauser and Mother’s Couch), The Public Theater (Demon Baby), The Actors Theater of Louisville (Owls), The Vineyard (Alice The Magnet) and others. She is currently writing a new play, Black Cat Lost, that has been commissioned by Soho Rep. She has been a resident at the MacDowell colony, a recipient of a NYSCAgrant and a MAP Fund grant from the Rockefeller Foundation. Her play Demon Baby is included in the anthology “New Downtown Now” edited by Mac Wellman and Young Jean Lee, published by University of Minnesota Press. She is a member of the Obie-winning collective 13P, as well as the co-founder of the Brooklyn Writer’s Space.

Will Eno garnered international attention with Thom Pain (based on nothing), which played to acclaim in London, Edinburgh and New York and was a finalist for the Pulitzer Prize for Drama. Charles Isherwood of The New York Times hailed Eno as “a Samuel Beckett for the Jon Stewart generation.” Eno’s other plays include Oh, The Humanity and other exclamations; Tragedy: a tragedy; The Flu Season; Kid Blanc; King: a problem play; and an adaptation of Ibsen’s Peer Gynt. In 2007, he was awarded the National Arts Club’s Kesselring Honor.

Itamar Moses is the author of Love/Stories (Or But You Will Get Used To It), Outrage, Bach at Leipzig, Celebrity Row, The Four of Us, Yellowjacket, Back Back Back and Completeness, Reality! (a musical with Gaby Alter), and Fortress of Solitude (a musical with Michael Friedman and Daniel Aukin. He has received new play commissions from The McCarter Theater, Playwrights Horizons, Berkeley Repertory Theatre, The Wilma Theater, South Coast Rep, Manhattan Theatre Club, and Lincoln Center. He is a member of the Dramatists Guild, MCC Playwrights Coalition, Naked Angels Writers Group, and is a New York Theatre Workshop Usual Suspect.

Adam Rapp is a novelist, filmmaker, playwright and director. In 2006, he was named a finalist for the Pulitzer Prize for his play Red Light Winter. His other plays include Bingo with the Indians, Kindness, American Sligo, Nocturne, Blackbird, Stone Cold Dead Serious, Finer Noble Gases, Essential Self Defense, Trueblinka, and Faster. As a director, his production of Blackbird received two Drama Desk nominations. Red Light Winter won the Joseph Jefferson Award in Chicago and a Lucille Lortel Nomination for Best New Play and two Obie Awards in NYC. Finer Noble Gases at the 2006 Edinburgh Festival received a Fringe First Award. His films include Winter Passing and Blackbird. His newest play, The Metal Children, opens at The Vineyard in February 2010.