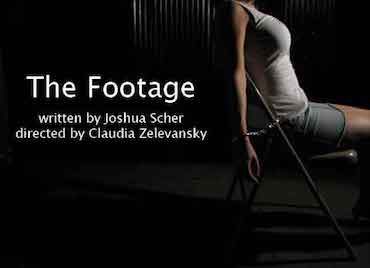 “The Footage is compelling theater. It will haunt you long after you leave.” – Huffington Post

“Scher creates a world more familiar to some of us than we’d like to admit.” – Variety

“Joshua Scher’s new play The Footage is a stylish, engrossing, contemporary thriller. Claudia Zelevansky, along with her excellent ensemble drawn from the Flea Theater’s Bats, realizes Scher’s vision immaculately in the intimate basement theatre space that puts this story almost too close for comfort to an audience of would-be voyeurs.” – www.nytheatre.com

The Flea Theater announces the World Premiere of THE FOOTAGE. Written by Joshua Scher and directed by Claudia Zelevansky, performances of this online gaming drama begin October 23.

A group of twenty-somethings collide within the world of an online role-playing game. Can the footage-heads save the young woman who’s been abducted before the cameras stop rolling? A dark and twisted multimedia tale about the insidious encroachment of the internet into our lives. THE FOOTAGEincludes sexual content; not appropriate for children.

Joshua Scher wrote THE FOOTAGE with The Bats in mind. His play Marvel was included in Roundabout Theater’s New Voices Program, directed by Charles Randolph-Wright. Scher has also worked with the Huntington Theater, Portland Stage, the O’Neill Theater Festival, and the Williamstown Theater Festival. His first play, Velvet Ropes, was published while a student at Yale School of Drama. He holds a BA with Honors in Creative Writing from Brown University. A collection of his monologues was published by Smith and Krauss in their 2006 Audition Arsenal series, and his play Flushed is slated for publication by Baker’s Plays.

Claudia Zelevansky has directed productions at California Institute of the Arts, Manhattan Class Company, New York International Fringe Festival, Shakespeare Theatre of New Jersey, Actor’s Express Theatre (Atlanta), The Alliance Theatre (Atlanta), and Dallas Theater Center, where she was Associate Director for three-seasons. She was a Jonathan Alper Directing Fellow at Manhattan Theatre Club, and has worked at The Public Theatre and Ars Nova. Zelevansky earned her undergraduate degree in Performance Studies from Northwestern University, and her MFA in directing from Yale University’s School of Drama. She made her directorial film debut in 2007 with “The Cold Snap.”

THE FOOTAGE runs October 23 – November 30. Tickets are $20. Click the link on the top right to buy yours today!