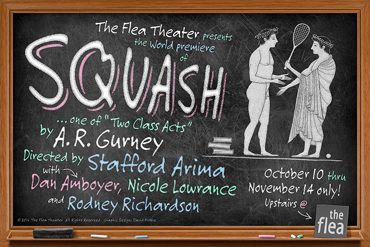 In Squash, A professor of classic literature finds himself questioning his identity when a student presents an intriguing take on Plato’s Symposium. Boundaries are tested and personal lives are upended as teacher and student grapple with sexuality, love, and sport.

Dan Amboyer (Dan Proctor) played Thad Weber on the first two seasons of Darren Star’s hit TV series “Younger,” and will now appear as twin brother Chad in the upcoming third season. Theatre: David Ives’ premiere of The Metromaniacs (Shakespeare Theatre, dir. Michael Kahn), Orlando in As You Like It, Bertram in Inherit the Wind (both helmed by Adrian Noble) Henry VII in Richard III (dir. Lindsay Posner) all at the Old Globe, seasons at the Utah Shakespeare Festival. Film/TV: Starred as Prince William in Hallmark’s William & Catherine: A Royal Romance, Batman v Superman: Dawn of Justice, Love the Coopers, CBS’ “Untitled John Cusack Pilot,” “Benders,” “Inside Amy Schumer,” “Person of Interest,” “Unforgettable,” “Body of Proof,” “Graceland,” “Law & Order,” “All My Children.” He is a founding member of Exit, Pursued By a Bear (artistic director Ed Iskandar), and a graduate of Carnegie Mellon’s School of Drama. Social media: @DanAmboyer.

TWO CLASS ACTS in one night!