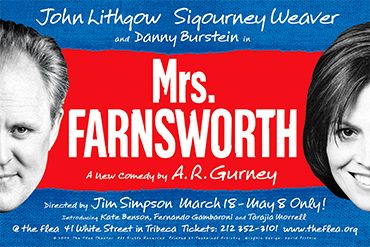 The comedy by Mr. Gurney will be produced in The Flea’s 88-seat venue in TriBeCa. Performances in the extended run begin September 29, 2004 and will play for a limited engagement through the presidential election in November. Mrs. Farnsworth sold out its initial run at The Flea Theater in April 2004 and played over the summer between both the Democratic and Republican conventions. Danny Burstein continues in the role of Gordon Bell, Mrs. Farnsworth’s writing instructor, and Gerry Bamman replaces Mr. Lithgow as Mr. Farnsworth.

The very proper, well educated Connecticut wife and mother Margery Farnsworth, signs up for a writing course with the intent of penning a tell-all book about our current President, with whom she has shared a shady past. Instructor Gordon Bell is all too happy to help Mrs. Farnsworth get the truth out. In swoops her husband, Forrest Farnsworth, who with beguiling charm and tender passion for his wife presents quite a different view of their collected history and politics. A.R. Gurney exquisitely captures Mr. and Mrs. Farnsworth, and once again presents the fading WASP way of life with humor and compassion.

Ms. Weaver’s last role at The Flea was in Anne Nelson’s 9/11 drama, The Guys. She recently appeared in M. Night Shyamalan’s film, The Village.

Also returning to the cast will be Kate Benson, Fernando Gambaroni and Tarajia Morell. All three are members of the Bat Theater Company, the resident acting company at The Flea, comprised of some of the city’s most talented emerging artists. Each year, more than 1,000 young people audition for a place in the 30-person company.

Sigourney Weaver (Mrs. Farnsworth) made her first New York stage appearance in an Off-Off-Broadway production of Christopher Durang’s The Nature and Purpose of the Universe, followed by another Off-Broadway double bill, Durang’s Titanic and Das Lusitania Songspiel, which she co-wrote with Durang. She has appeared in many Off-Broadway productions, working with such writers as John Guare, Albert Innaurato, Richard Nelson, Len Jenkin and Mr. Durang. Weaver received a Tony Award nomination for her role in Hurlyburly on Broadway, directed by Mike Nichols. In 1996, Weaver returned to Broadway in the Lincoln Center production of Sex and Longing, written by Christopher Durang. Recent stage credits include The Guys, by Anne Nelson, directed by Jim Simpson at the Flea Theater in which she played opposite Bill Murray and The Mercy Seat by Neil LaBute opposite Liev Schreiber at MCC. Weaver made her motion picture debut in 1979 in Ridley Scott’s blockbuster Alien and has since created a host of memorable characters in films from Ghostbusters to The Year of Living Dangerously to Gorillas in the Mist to Working Girl to Death and the Maiden to The Ice Storm. Ms. Weaver was born and educated in New York City and is an enthusiastic supporter of The Flea Theater.

Gerry Bamman (Mr. Farnsworth) received Obie and Drama League awards and a Drama Desk Nomination for best featured actor for his performance as Richard Nixon in Nixon’s Nixon. He was a founding member of the Manhattan Project, one of the foremost experimental theater companies of the 1970s, directed by Andre Gregory. Their production of Alice In Wonderland received an Obie award and was performed over 500 times in New York and around the world. He has appeared in many regional and New York theaters, on Broadway and off. His most recent work was in the title role of the world premiere of Ward Just’s Lowell Limpet, Robert Moses in Shakespeare, Moses, and Joe Papp—which won the Helen Hayes award for best new play—and Lee Blessing’s Black Sheep at Barrington Stage. Films: Runaway Jury, Two Family House, Passion of Mind, Home Alone 1 and 2, Lorenzo’s Oil, Secret of My Success, Bodyguard, True Believer, Pink Cadillac, and—coming in September and October—The Cookout and Around The Bend. Many appearances on Law and Order. A 1999 Fox Foundation grant recipient.

Brian Aldous (Lights) has been lighting downtown theaters for twenty years. Companies he has worked for include Soho Rep (Mac Wellman’s Dracula), the late lamented Circle Rep (Regina Taylor’s Escape from Paradise), Jean Cocteau Rep (many classic plays over 11 years as resident designer), Cucaracha Theatre (everything they ever did) and even the Blue Man Group. He is Lighting Director for Dance at Symphony Space as well as Lighting Designer for Kick/Stand Dance, a five choreographer collective based in Williamsburg. He has lit dance and taught for the Dance Department at Bard College for ten years, and recently helped them move into the new Frank Geary designed Fisher Performing Arts Center. He is especially proud of his long collaboration with set designer Kyle Chepulis, which began in 1989 with the EnGarde Arts production of Mac Wellman’s Crowbar, a project which helped save the then-ruinous Victory Theatre from destruction and was nominated for an American Theatre Wing design award.