In the Sea of Heaven 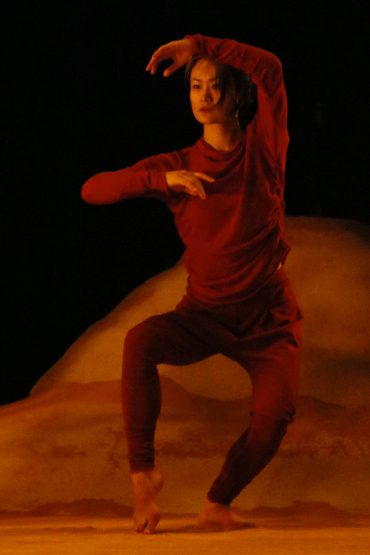 The program’s centerpiece is the New York premiere of In the Sea of Heaven, with live music performed by award-winning Japanese musician and composer, Kato Hideki. Inspired by the 2011 earthquake and tsunami that devastated Japan as well as the 2017 hurricanes Harvey and Irma. It’s a fairytale that pays tribute to the victims who are transformed into angels. Another New York premiere The Game 2 is a second incarnation of the men’s quartet, The Game, from the full evening length work Salaryman. What happens when women join the workforce?  How do their interpersonal relationships, dreams, desires and competitive nature to survive, to be recognized, to get ahead, reveal themselves? With gestures from the everyday lifestyle of the worker, these women fight their way to the top at any expense. There is no room for female sensitivities or sweet pleasantries. This is all about the big Win.

Les Reves D’apres Midi, music by Claude Debussy and choreography by Kazuko Hirabayashi is a classical modern duet based on an office romance between a boss and his secretary. As he dreams at his desk, his secretary becomes his object of desire, but only for a moment before they return to their mundane, everyday existence, while the memory lingers on. Originally choreographed on Takehiro Ueyama and Jill Echo in 2004, this revival is a way to honor Ms. Hirabayashi and her work.  Her artistry and mentorship with Ueyama and Echo has spanned 30 years. Midi was outside of her normal body of contemporary, abstract work in that it leans more to the classical romantic approach to storytelling. It is timeless in its beauty and humanity.

TAKE Dance is a NYC-based contemporary dance company founded by Artistic Director Takehiro Ueyama. Since its inception in 2005, TAKE Dance has been praised for its exciting athletic movement and unusual sensitivity to create distinctive work that is uniquely “TAKE”. The Company’s mission is to create and stage works that deepen society’s sensitivity and understanding of the human condition. The fusion of Eastern and Western culture is a key element in what makes Take’s work truly one of a kind. By making bold choices in movement, musical selections, and subject matter, TAKE Dance strives not simply to be seen but rather, fully experienced. Take utilizes action to inspire action: the works created and performed by the Company are based on socially relevant issues and seek to make a positive impact on society. TAKE Dance seeks to use the human body to its fullest capacity, smashing the barriers created by language, skin color, gender, or religion. By taking these aforementioned differences that have become so enormously divisive and linking them, Take’s work speaks to a wide range of audience members and demonstrates that despite the variation that exists between us, we are all ultimately connected to one another. takedance.org