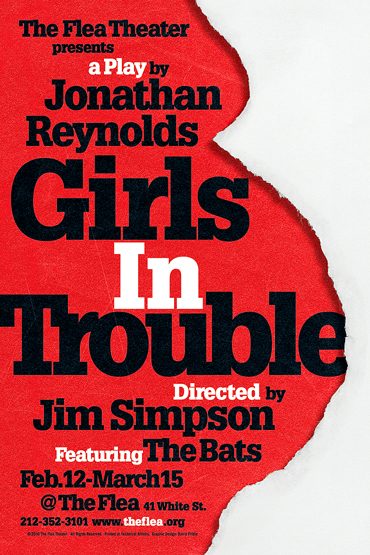 Tickets now on sale through April 11!
Due to popular demand, GIRLS IN TROUBLE has extended to add additional performances.

“A Shavian provocation for the age of Fox News! Jonathan Reynolds goes places intellectually and dramatically that no left-wing dramatist would dare!“
—The New York Times

BroadwayWorld exclaims that GIRLS IN TROUBLE is “worth paying over a hundred dollars to watch. The good news is that the tickets at The Flea are significantly more affordable. The bad news is that the seating is extremely limited, so get those tickets here. Today.”

ABOUT GIRLS IN TROUBLE

Don’t miss the most controversial new play of the season. GIRLS IN TROUBLE is a striking and ferocious play which dares to explore the controversial history of abortion, through its life-changing affect on women across several generations. This darkly humorous, shocking new work is sure to inspire spirited debate!

THE PLAYWRIGHT
Jonathan Reynolds has had 9 plays produced in New York: Stonewall Jackson’s House (short listed for Pulitzer Prize); Dinner With Demons, a solo show in which he prepared a full five-course meal onstage eight times a week; Geniuses, produced by Playwrights Horizons and which ran for a year off-Broadway; the one-acts Yanks 3 Detroit O Top of the 7th and Rubbers at The American Place; Fighting International Fat; and Tunnel Fever or The Sheep is Out. He has had five screenplays produced, most notably Micki and Maude and My Stepmother is an Alien. He is the recipient of Rockefeller and Guggenheim Foundation grants as well as The Dramatists Guild Flora Roberts Award for Sustained Achievement. For five years, he was Treasurer of The Dramatists Guild, and for six years wrote a bi-weekly food column for The New York Times Sunday Magazine. His memoir, “Wrestling With Gravy: A Life, With Food”, was recently published by Random House. For more info, visit Jonathan Reynolds’ website.

The show runs 2 hours with one 10 minute intermission.

This production is made possible, in part, with support from the Dramatists Guild Fund.