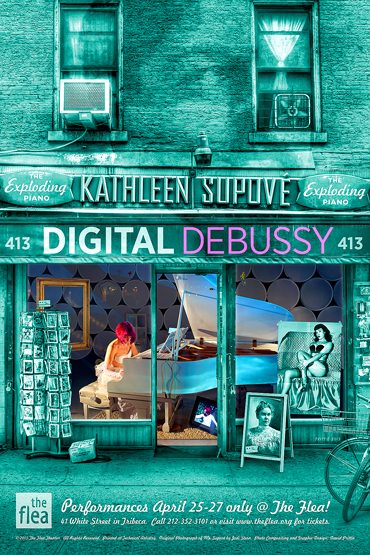 Digital Debussy is a collection of compositions riffing on Debussy with sampled sounds and beats, electro-acoustic transformation, and 21st Century virtuoso piano showpieces performed by Kathleen Supové. “Debussy suggests a state of mind, one that is envisioned in a crystalline way by each individual… each of us sees it differently,” says Supové.

“Diva” layers live musical gestures into the “sonic atmosphere”, blending bowed and plucked piano, electronics and vocal winds into an other-worldly environment. Set pieces and video juxtapose time and space, past and present – creating a dream sequence coexisting with life.

Imagined as a hallucinatory duet with Claude Debussy and inspired by his stormy prelude “What the West Wind Saw”, the piece couples Supové’s wild playing with recordings of Hurricane Sandy and distorted fragments of the original prelude.

Sex, death, and bondage are woven together with the piano music of Debussy. Alternating roles as axe murderer, bondage queen, and piano virtuoso, “Triumph” draws the audience into a joyous, uncomfortable, and trancelike world of burlesque and blood.

Kathleen Supové (Pianist) is one of America’s most acclaimed and versatile contemporary music pianists, known for continually redefining what a pianist/keyboardist/performance artist is, in today’s world. Her solo concerts are entitled The Exploding Piano. In May, 2012, she received the special John Cage Award from ASCAP for “the artistry and passion with which she performs, commissions, records, and champions the music of our time.”
She is also involved in commissioning a repertoire of pieces for piano, electronics, and video. Many of them have entered the popular repertory of 21st Century piano works. Recent projects include collaboration with SIDEBAND Laptop Orchestra from Princeton. Her latest solo CD is The Exploding Piano, on the Major Who label. For more info, visit www.supove.com or follow her on Facebook at Exploding Piano or Twitter as @Supove.

Nick Didkovsky (Composer) is a guitarist, composer, band leader, and music software programmer. He founded the uncorruptable rock band Doctor Nerve in 1983 (www.doctornerve.org) which continues to record and perform to this day, and is a member of the Fred Frith Guitar Quartet. He has composed for Bang On A Can All-Stars, Meridian Arts Ensemble, ETHEL, and many others. His compositions and guitar work appear on over 50 records.

With computer music pioneer Phil Burk, Didkovsky created Java Music Specification Language (www.algomusic.com), which is used by composers all over the world. He has taught JMSL at Dartmouth College, CalArts, Columbia University, and NYU. With composer Georg Hajdu, he has created MaxScore, an object that uses JMSL to bring music notation to Max/MSP.

His Black Sabbath Guitar Lessons on YouTube have been received with great enthusiasm by metal fans all over the world. His metal band Häßliche Luftmasken premiered in June 2011 (www.tinyurl.com/maskenmetal).

Annie Gosfield (Composer) is a composer based in New York City and hailed as “a star of the downtown scene” by the New Yorker. Her work often explores the inherent beauty of non-musical sounds, and many of her compositions combine electronics with acoustic instruments, and couple traditional notation with improvisational techniques. A 2012 fellow at the American Academy in Berlin, she recently received the Foundation for Contemporary Arts “Grants to Artists” award. Her latest release is 2013’s “Almost Truths and Open Deceptions”, which is her fourth solo release on the Tzadik label, and features a cello chamber concerto, a piece for piano and broken shortwave radio, and a work inspired by warped 78 records. Dedicated to working closely with performers, Gosfield has created new works in close collaboration with musicians such as ex-Kronos cellist Joan Jeanrenaud, pianist Lisa Moore, cellist Felix Fan, Frances-Marie Uitti, Athelas Sinfonietta, the Flux Quartet, and the Bang on a Can All-Stars. Her music has been performed worldwide at Warsaw Autumn, the Bang on a Can Marathon, MaerzMusik, the Venice Biennale, OtherMinds Festival, Lincoln Center, and The Kitchen. Gosfield is active as both a composer and performer, playing piano and sampling keyboards in her own ensemble. Five of her articles on the compositional process have been published in the New York Times’ series “The Score”. Gosfield held the Darius Milhaud chair at Mills College, and has taught at Princeton University and CalArts. For more information visit anniegosfield.com

Jeremy Bloom (Direction) In addition to working with new playwrights and new music, Jeremy directs his own original adaptations including Peter/Wendy [Walkerspace and the cell in NYC/ Custom Made Theater Co. in San Francisco], and Leaves of Grass (Nude) [at the cell in NYC/Links Hall in Chicago], as well as collaborations with Brian Rady as RADY&BLOOM, including The Girl of the Golden West [Ice Factory], The Orange Person [IRT] and Lameness of a Horse [Exapno]. Assistant credits include The Flea, The Met and Broadway. Jeremy is an Artistic Executive at Evenstar Films, resident artist at the cell, and an adjunct faculty member at Montclair State University.

Aleksandar Kostic (Direction) is a film director, producer and visual artist born in Belgrade, Serbia currently based in New York City. Kostic has worked on a wide array of artistic films and multimedia projects with a host of independent producers, filmmakers, artists, composers and theatre directors. Much of his creative work has revolved around exploring our movement through life, and how we touch and are touched by the larger world we pass through, such as his short films Walk of Life, Room, and Journey, which screened at numerous US and international film festivals, including Big Apple Film Festival New York, the New Filmmakers at Anthology Film Archives in New York, Barcelona International Short Film Festival, Docufest Atlanta and many more.
Kostic recent experimental film Persistence of Memory was premiere at the MaerzMusik Festival in Berlin, Germany in March 2012 in conjunction with concert by Joan La Barbara. The theme of the festival was “Cage and Consequences” celebrating 100th anniversary of John Cage’s birth.
In parallel, 2008 he has also established himself in the area of documentary film with The World of Vija Vetra, an award-winning portrait of the renowned dancer and choreographer.
His first video installation was Storefront Diva (phase one) done in December 2011 in Greenwich Village New York.
Kostic is currently developing his feature film Bitter Lemon and several feature film ideas for production in the coming year. For more information visit aleksandarkostic.com

Marija Plavsic Kostic (Scenic and Costume Designer) is thrilled to be a part of this production. Her recent theater designs include the “Storefront Diva” Phase One, Pit, The King and I, Urinetown, Amahl and the Night Visitors, Lombardi (NYC), The Sins of Sor Juana and Angels in America (Chicago, IL) and feature films Love Hunter and Allure (NYC). Marija is a New York based designer and recent graduate of UConn’s MFA Stage Design Program and holds her BFA from the University of Applied Arts in Belgrade, Serbia, where she did several film and theater designs. She is currently working on the pre production of feature film Bitter Lemon by Aleksandar Kostic. Marija thanks The Flea Theater, Joan and Kathy for yet another opportunity to be creative. Her website is www.marijaplavsic.com