A 24-Decade History of Popular Music 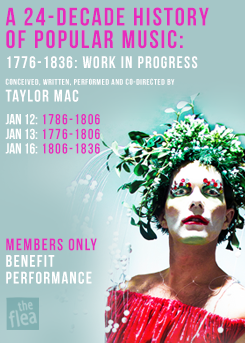 “Fabulousness can come in many forms, and Taylor Mac seems intent on assuming every one of them.”
-The New York Times

Join us for the next installment of Taylor Mac’s 24-Decade musical extravaganza, as Taylor adds The Flea to a venue roster including The Public Theater, Lincoln Center, The Sydney Opera House, and New York Live Arts. Directed by Taylor Mac and Artistic Director Niegel Smith, Taylor Mac will emerge as a bedazzled creature, exploring community and history through song.

A 24-Decade History of Popular Music:

This work was developed with the support of the Park Avenue Armory residency program and the 2015 Sundance Institute Theatre Lab at the Sundance Resort.

A 24-DECADE HISTORY OF POPULAR MUSIC was made possible with funding by the New England Foundation for the Arts’ National Theater Project, with lead funding from The Andrew W. Mellon Foundation.