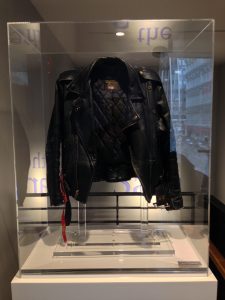 On Monday, February 5, 2018, the actual birthday of writer, composer and director Elizabeth Swados, The Flea held a small ceremony and revealed her black leather biker jacket in a large Plexiglas container which will be permanently placed in the lobby of The Sam, The Flea’s largest black box performance space.

The container was designed by artist Steven Sebring and holds not only the jacket but Liz’s keys which she kept in her right pocket. The jacket was originally purchased and worn by Rosalind Lichter, Swados’ longtime life partner. “Liz somehow absconded with the jacket and wore it continually until it actually became hers.”

The ceremony included a group of Bats, The Flea’s resident company of emerging actors singing, Wide White Road, a song from the last theatrical piece that Swados composed and directed, The Nomad which premiered at The Flea in the winter of 2015. Niegel Smith Artistic Director of The Flea welcomed a group of Swados’ closest friends. Ms. Lichter told the story about the jacket and then Carol Ostrow, The Flea’s Producing Director spoke.

Said Ostrow, “Liz wrote about runaways, iconoclasts, outcasts and outsiders – but really she was the ultimate insider – a wonderful giving collaborator, an instinctive and caring director, a dedicated teacher, a relentless and unfailing provocateur and a child of the theater – always a conduit in pursuit of excellence. She was beloved by The Bats and was revered by all of the designers and musicians who came under her spell. Liz will always be remembered, and she is dearly missed. We all feel so lucky that The Flea has a little part of Liz and she is now a part of The Flea forever.”