You Better Sit Down: Tales From My Parents’ Divorce 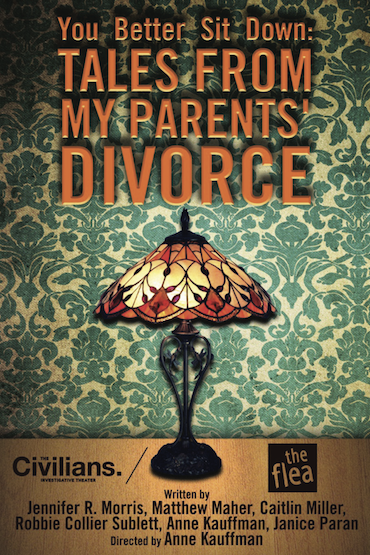 Engaging. The truth about these four defunct marriages is laid bare with a simplicity and honesty that makes you reflect on how infrequently many adult children dare to probe into the most momentous passages in their parents’ lives. – THE NEW YORK TIMES

Entertaining and moving. Anyone who’s gone through a similar situation — and statistics suggest you probably have — will find much to relate to here. – THE NEW YORK POST

I found myself most touched by the series of residual shocks under the substrate of this elegant, wistfully funny show—the little tremors from lifetimes spent realizing that a parent’s trauma is forever out of reach.
– TIME OUT NEW YORK (Critic’s Pick) ****

This is riveting confessional theater. – VARIETY

A chronicle of generational change…The couples’ sobering breakups, years later, coincide with other sorts of cultural retrenchments— a broader backdrop that gives this absorbingly candid piece the breadth to comment on kinships of all configurations, whether divided by divorce or not.– THE VILLAGE VOICE

Four members of The Civilians sat their parents down and asked them for the real story behind their divorces. Each actor assumes the role of their own mother or father (or in one case, both) in a show crafted entirely from those verbatim interviews. YOU BETTER SIT DOWN: TALESFROM MY PARENTS’ DIVORCE is shockingly candid, unexpectedly hilarious, and proves that what we want to know about our parents’ lives and what we actually should know are two totally different things.

YOU BETTER SIT DOWN: TALES FROM MY PARENTS’ DIVORCE runs April 7 – May 6, Tuesday through Saturday @ 7pm, Saturday & Sunday @ 3pm. Note: No show on April 8, but there is an added performance on Monday, April 9 @ 7pm. The Flea is located at 41 White Street between Church and Broadway, three blocks south of Canal, close to the A/C/E, N/R/Q, 6, J/M/Z and 1 subway lines. Tickets are $35 (except for Tuesday, which are Pay-What-You-Can) and are available by calling 212-352-3101 or online at www.theflea.org.

As part of the previously announced run of YOUBETTER SIT DOWN: TALES FROM MY PARENTS’ DIVORCE, the Flea and The Civilians are pleased to announce YOU BETTER SITDOWN SALON NIGHTS: YOUR TALES TAKETHE STAGE, an innovative series of post-play events. Every Wednesday and Saturday evening following the show, we offer our audiences a rare opportunity to get personally engaged and share in the storytelling. Civilians’ artists and The Flea’s resident acting company, The Bats, will develop short scenes and songs from material contributed by audiences both in the theater and online based on questions related to personal experiences with divorce and relationships. In addition, a unique collaboration of artists and organizations including playwrights Jason Grote (a writer on NBC’s Smash) and Jon Kern (a writer on The Simpsons), Michael Schulman of The New Yorker, composer Michael Friedman, and singer-songwriters Kamara Thomas, and Sam Bisbee will present works as part of these one-of-a-kind events.

About the Show’s Creators

JENNIFER R. MORRIS
New York acting credits include Canard, Canard, Goose; I am Nobody’s Lunch; The Ladies; Gone Missing, [sic]. Regionaly, she has performed with Actors Theater of Louisville, La Jolla Playhouse, and NY Stage & Film. She wrote and hosted shows on TV Food Network and WE. She is co-founder of Giant Telephone, a digital media production company, which has created shows for ABC/Disney, Fremantle Media, and FX. She is a producer on two upcoming films, Tiffany and Mentor.

JANICE PARAN
Janice is a New Jersey-based dramaturg and an Artistic Associate of the Sundance Institute Theatre Program. Her credits include Having Our Say and Anna in the Tropics on Broadway; Motherhood Out Loud Off-Broadway; regional productions of The Devil at Noon (Actors Theatre of Louisville), The Trinity River Plays (Dallas Theater Center and Goodman Theatre), An Iliad (Seattle Rep), The Good Negro(Dallas Theater Center); and 14 seasons as resident dramaturg at McCarter Theatre Center.

THE CIVILIANS is the center for investigative theater led by Artistic Director Steve Cosson, supporting the development and production of new theater from creative inquiries into the most vital questions of the present. Since its founding in 2001, The Civilians has supported the creation of eleven original shows produced at theaters in over 40 cities nationally and internationally. The Civilians received an Obie in 2004 and the company’s work has been included in top ten lists in the New York Times, The New Yorker, and Time Out New York and published by Dramatists Play Service, Oberon Books, Ghostlight Records and a recent anthology by Playscripts, Inc. The Civilians champion innovation by tackling complex and under-explored subjects, enabling artists to enrich their processes through in-depth interaction with their topics, diversifying artistic voices and audiences, and integrating theater with new media. For more info visit www.thecivilians.org