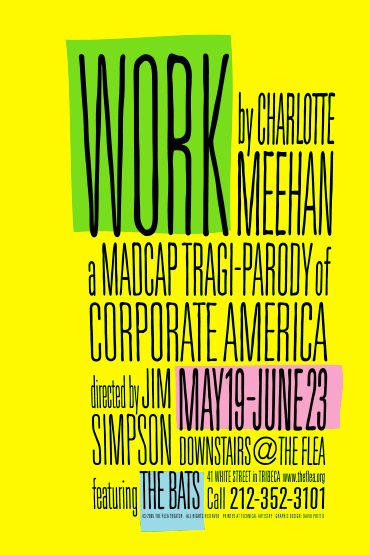 The Flea Theater announces the New York premiere of WORK by Charlotte Meehan. Subtitled “a madcap tragi-parody of corporate America,” this six character farce is directed by Jim Simpson (The Guys, Benten Kozo, Mrs. Farnsworth) with a cast culled from The Flea’s resident acting company The Bats. Previews begin May 19th with opening night scheduled for May 28th.

WORK takes us into a world of employee sex scandals, nepotism, body odor, insider trading, subservience to the boss, the gay guy, falsified documents and the inevitable restructuring. Just another day at work? It is in corporate America. One big happy family. With guns.

Charlotte Meehan’s stage works have been developed and produced in New York at numerous venues including The Culture Project, Blue Heron Arts Center, La MaMa, HERE, Ohio Theatre, and Pratt Institute; in Providence, RI at Perishable Theatre and Brown University; and in Bristol, England at The Alma Theatre. Her awards include a 2004 Mars Fellowship, a 2002-03 artist residency at HERE, and a Lucille Lortel Playwriting Fellowship. Meehan is Playwright-in-Residence at Wheaton College in Massachusetts.