By Jewelle Gomez, in collaboration with Harry Waters Jr.
Directed by Mark Finley 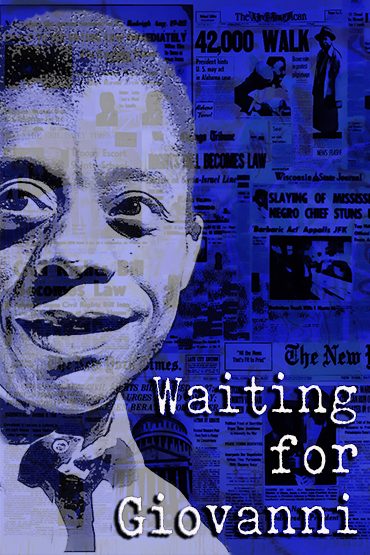 It’s 1957. Bombs are exploding in Black churches and lynchings are a fact of life for many across the U.S.  From these ashes a young Black writer emerges to become a literary celebrity bringing with him both his boundless talent and personal insecurities.  “Waiting for Giovanni,” a new play by Jewelle Gomez, in collaboration with Harry Waters Jr., imagines a moment in the mind of James Baldwin in which he struggles with writing a novel that he’s been told will ruin his career.

*Does not include a $2 Theater Restoration Fee.

Performances are at 7pm

Jewelle Gomez (Playwright) is the author of eight books including the Lambda Award-winning classic, THE GILDA STORIES, which has been in print since 1991. Her play, “Bones and Ash,” based on THE GILDA STORIES, was commissioned by the Urban Bush Women Company. “Waiting for Giovanni” is the first play of a trilogy about African American artists in the early part of the 20th century. The second play, “Leaving the Blues” about singer/composer, Alberta Hunter, premiered at San Francisco’s New Conservatory Theatre Center, where she is Playwright in Residence, in 2017. She is currently working on “Unpacking at Ptown,” the third play in the trilogy, which will premier in 2021. www.jewellegomez.com/ ; waiting4giovanni.blogspot.com/

Mark Finley (Director) is the artistic director of TOSOS and has directed many of its acclaimed productions including Doric Wilson’s Street Theater – 2016 IT Award Winner for Best Revival.  He made his Off-Broadway directorial debut with Chris Weikel’s Penny Penniworth.  He most recently directed the TOSOS production of the Byron Loyd’s Rebel Boy Fireworks (which premiered at the United Solo Arts Festival) and Virginia Baeta’s Damaged Goods (Emerging Artists). Mark is also an author, an actor and a graduate of the University of North Carolina School of the Arts.

TOSOS (The Other Side of Silence) is New York City’s oldest professional LGBTQ theater. In 1974, Off-Off Broadway veteran Doric Wilson (1939-2011), cabaret star Billy Blackwell and director Peter dell Valle, started the first professional gay theatre company in NYC. It was called The Other Side of Silence; TOSOS for short. In 2002, directors Mark Finley and Barry Childs and playwright Wilson resurrected TOSOS. The company has produced over 30 mainstage shows and so many readings of new plays and works in progress we have trouble counting them all. www.tososnyc.org

Cake and Champagne reception to follow performance, including a meet and greet with cast and creative team, with remarks by Playwright, Jewelle Gomez.