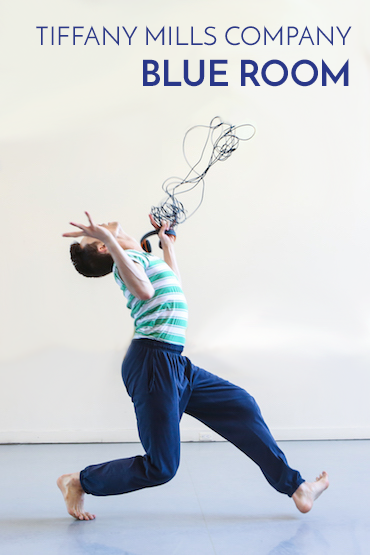 Tiffany Mills’s newest work, Blue Room, is inhabited by six distinct personalities who butt up against physical and emotional boundaries. Blue tape delineates a room laid out like an architect’s floor plan. The dancers and their interactions bring dimensionality and dynamic interplay to this room as they explore how we connect, if we connect, the inner world that isolates, the outer world that is full of contradictions, and the consequences of our actions. Moments of isolation are attempts to leave the room, disappear, or transform. Moments of connection are built upon collision, invasion of personal space, or attempted cohabitation.

An eclectic array of music, featuring New York-based composers Daniel Wohl, Angelica Negron, and others, allows for radical shifts in movement and soundscape. With this work Mills asks: Can our boundaries be porous? Can we truly connect with those around us?

Blue Room is supported, in part, by public funds from the New York City Department of Cultural Affairs in partnership with the City Council. The development of this project has been supported by a 2017 CUNY Dance Initiative residency at Queensborough Community College with a performance at Queensborough Performing Arts Center; a Baker Artist-in-Residence at Muhlenberg College, PA; and a residency at Kenyon College, OH. Blue Room printed materials are made possible with funds from the Destination Brooklyn Program, funded by the Office of the Brooklyn Borough President Eric L. Adams and NYC & Company Foundation, administered by Brooklyn Arts Council.

*An additional $2 Restoration Fee keeps the lights on in our new digs. Thank you.

Benefit Performance – Tickets cost $50 and include access to a post-show reception.

5-6pm Kids Class before the 7pm Performance. Free when accompanied with the purchase of one child’s ticket and one adult’s ticket.