The Shakes: The Honest Whore 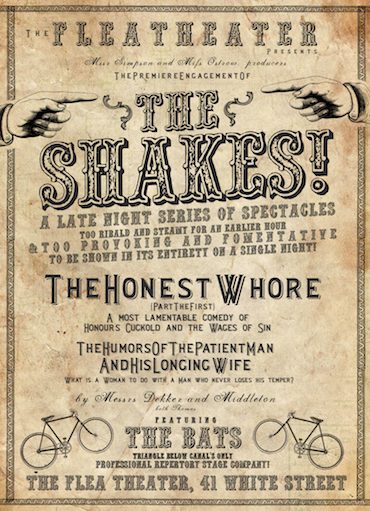 The Flea Theater is proud to announce the pilot cycle of yet another late-night offering, The Shakes – five teams of actors helmed by five Flea Resident Directors each perform an act of a classic forgotten drama. Cast from The Flea resident acting company, The Bats, The Shakesfollows in the footsteps of The Flea’s immensely popular late night series, #serials@theflea. The Shakes will be performed in two act installments until the play is complete.

The inaugural show, The Honest Whore by Thomas Dekker and Thomas Middleton, is a tale of honor and love betrayed. It tells three interweaving comic storylines that are ripe for recovery to the modern repertory.

The Shakes takes full advantage of the intimate staging of the downstairs theater at The Flea to replicate the experience of Blackfriars – the down and dirty 17th century East London that hosted the premieres of Middleton and Dekker’s plays. The intimacy of the space is part of the experience, putting audiences up against and amidst the actors.

All tickets are only $15 (available online and at the door) and include a free drink. Marathon tickets are $30.

Thomas Middleton is best known for his bloody tragedies The Changeling, Women Beware Women, The Chaste Maid in Cheapside and Revenger’s Tragedy. Modern critical assessment of his writing places him second only to Shakespeare among the Elizabethan dramatists.

Thomas Dekker is remembered for his pot-boiler comedies, exemplified in his hit The Shoemaker’s Holiday. He is most famous for having co-written plays with all the great playwrights of the Jacobean stage as well as his keen involvement in The War of the Theaters and other controversies of the era. After The Honest Whore, the two writers would go on to collaborate on their immensely popular The Roaring Girl.

Created by Flea Resident Directors Danya Taymor and Kristan Seemel, in collaboration with Flea Artistic Director Jim Simpson. Modeled after the infamous serialized act-by-act Pyramid Club Titus Andronicusfrom the 1980s, part of the thrill comes from the radically divergent thrust of each act in approach and delivery as the different artistic teams make the most out of their part of the play.