The Place We Built – The Flea Theater
Skip to content

The Place We Built 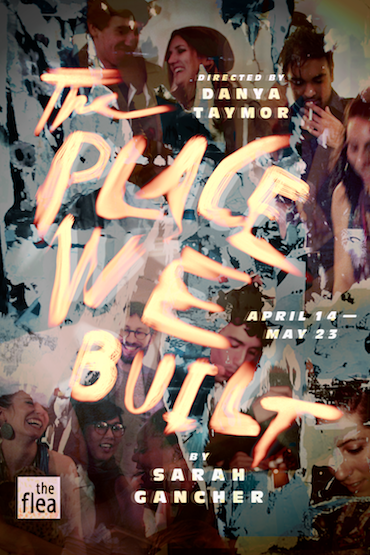 “Near flawless…you wanted to party with Taymor’s bohemians.”—Theater in the Now

“The Place We Built feels like an epic, life-changing indie documentary”—QuickTheater

In a deserted neighborhood in post-communist Budapest, a group of young bohemians build a bar. Reclaiming a Jewish identity their parents’ generation abandoned after the Holocaust, they create a vibrant new subculture combining big ideas, intense debates and outrageous parties. But as authoritarianism and anti-Semitism make a surprise comeback in Hungary, they must fight to save the place they built.

Sarah Gancher (playwright) is a playwright who loves epic stories, big ideas, and deep comedy. Her most frequent subject is how history is reflected in individual lives—how places, communities, and debates evolve over time. Her plays have been produced or developed at London’s National Theatre, Edinburgh’s Traverse Theatre, Budapest’s Quarter6Quarter7 Festival, Steppenwolf, PS122, Ars Nova, P73, New York Stage and Film, the Women’s Project, NYC SummerStage, the Great Plains Theater Conference, and Telluride Theatre, among others. She has been a Time Warner Fellow at the Women’s Project Playwrights Lab, a member of P73’s writer’s group Interstate 73, a Writing Fellow with The Playwrights’ Realm, and a member of the Ars Nova Play Group.

Sarah is the winner of the New York Stage and Film Founder’s Award, the Clifford Odets Ensemble Play Commission, and residencies from the Jewish Plays Project, Tofte Lakes, and SPACE at Ryder Farm. She has been a playwright-in-residence at Budapest’s Quarter6Quarter7 Festival, which presented Hungarian language staged readings of three plays from her 7th cycle (Seder, Klauzál Square, and Five Mothers) and continues to provide support for that project.

She frequently collaborates with devising ensembles such as Colorado’s Telluride Theatre, Hand2Mouth from Portland, Oregon, NYC’s The TEAM, and Blue Man Group. She is the collaborating playwright on Mission Drift, a musical about capitalism and the myth of the frontier written with director Rachel Chavkin, composer Heather Christian, and The TEAM (Coimbra, Lisbon, Salzburg, Edinburgh Fringe, PS 122 COIL Festival, Perth, Hong Kong, and London’s National Theatre; winner of Edinburgh International Festival Fringe Award, Scotsman Fringe First, Herald Angel, Guardian Best of 2011, nom, Drama League for Distinguished Production of a Musical.) She is currently under commission from Ars Nova, writing a musical with The Bengsons.

She has worked behind the scenes at The Colbert Report, The Metropolitan Opera Guild, The Big Apple Circus, and Norway’s Stellapolaris, among others. As a jazz violinist, Sarah has played in groups from New Orleans to Budapest. A proud Oakland native, she currently lives in Queens. MFA: NYU.

Danya Taymor (director) is a director and translator. She is an Associate Artist at The Flea Theater, where she served as a Resident Director from 2011-2015 and received the Van Lier fellowship. Work at the Flea includes: Brian Watkins’ My Daughter Keeps Our Hammer (NY Times/Time Out Critics Pick) and Luis Enrique Guitiérrez Ortiz Monasterio’s I Hate Fucking Mexicans. She co-created The Shakes, The Flea’s late night classical theater series, where she directed Shakespeare’s Romeo and Juliet and Dekker and Middleton’s The Honest Whore and is a frequent director of #serials@theflea.