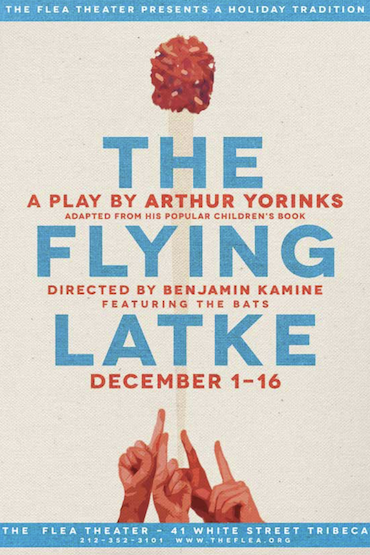 The Flea Theater is proud to present The Flying Latke by Caldecott-Medal winner Arthur Yorinks, a heart-warming tale of Chanukah celebrations, holiday dysfunction and the miracle of a certain soaring potato pancake. Directed by Flea Resident Director Ben Kamine, this limited engagement runs Saturday & Sunday mornings only, December 1 through 16 Downstairs at The Flea.

Adapted by Yorinks from his classic children’s book, The Flying Latke tells the story of young Danny Silverstein and his “meshugge” family as they celebrate the first night of Chanukah. Their holiday food fight sends a latke sailing out the window and over the city, causing a UFO frenzy that traps the Silversteins in their home with their extended family visiting and nothing but latkes to eat.

“It’s my favorite Chanukah story,” says Flea Theater Resident Director Ben Kamine. “We have all had this experience of family togetherness at holiday gatherings; those are my aunts and uncles up there on stage.”

Arthur Yorinks has written and directed for opera, theater, dance, film, and radio and is the author of over thirty acclaimed and award-winning books, including the Caldecott Medal-winner, Hey, Al. In his four decades of working in the performing arts, Mr. Yorinks has written and directed numerous plays includingSo, Sue Me, which premiered at The Kennedy Center and It’s Alive, which premiered at the Tribeca Performing Arts Center in New York. Mr. Yorinks was Philip Glass’s librettist for the operas The Juniper Tree and The Fall of the House of Usher, both of which have been performed all over the world. Mr. Yorinks, in addition to originating A New Theater of Sound in collaboration with The Jerome L. Greene Performance Space, consults for New York Public Radio and runs the company he founded, The Yorinks Theater Group.

Benjamin H. Kamine is a Resident Director at The Flea Theater. He recently directed the world premiere of Thomas Bradshaw’s Job at The Flea. Other fun directing credits include Wars and Whoresby Jeffrey Barg and Sarah Ollove (Philly Fringe) and Medea’s Got Some Issues by Emilio Williams (Theater Row). He is the Resident Director at the Jewish Plays Project and is a member of the Lincoln Center Theater Directors Lab. He also works throughout New York as a sound, lighting, and projection designer, and is a Guest Artist at the Lab School for Collaborative Studies. Previous directing credits for The Flea: The Flying Latke by Arthur Yorinks (2011); Kathleen Supove and the Electric Sheep; The Shakes: The Honest Whore, Act 4; #serials@theflea