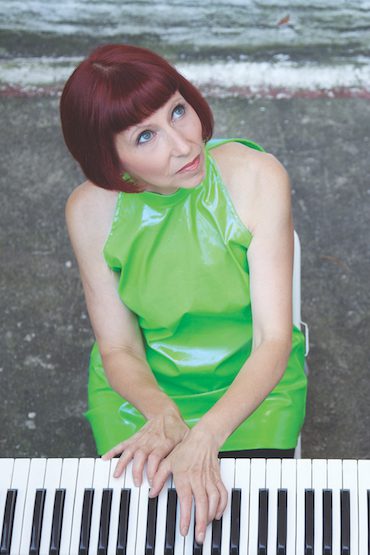 “What Ms. Supové is really exploding is the piano recital as we have known it, a mission more radical and arguably more needed.”

Kathleen Supové is one of America’s most acclaimed and versatile contemporary music pianists, known for continually redefining what a pianist/keyboardist/performance artist is in today’s world. Ms. Supové annually presents a series of solo concerts entitled The Exploding Piano. In this series she has performed and premiered works by a list of established and emerging composers, a Who’s Who of contemporary music for piano. She has especially championed music of compelling virtuosity and audience connection. The Exploding Piano is a multimedia experience using electronics, theatrical elements, vocal rants, staging, and collaboration with artists from other disciplines. Many of The Exploding Piano events were developed, visually and theatrically, through her connection to The Flea Theater in NYC. And through her composer collaborations, she has become an integral part of creating a repertory of piano pieces for the modern world.

Recent projects include a much-acclaimed CD, THE DEBUSSY EFFECT, on New Focus Recordings (La Barbara-Clark-Marks-Felsenfeld-Woolf-Gosfield-Cooper); a performance at Southbank Centre, London, of URBAN BIRDS by Arlene Sierra as part of Britain’s New Music Biennial; BATTERY, a choreographed kickboxing concerto by Randall Woolf (choreographed by Heidi Latsky;  EYE TO IVORY, an upcoming CD on Starkland, for vocalizing, theatrical, extended technique pianist, on Starkland (Childs-Woolf-Barash-Didkovsky-Naphtali); EXPLODING PIANO WITH HITCHCOCK AND KUBRICK ETUDES by Nicole Lizée; and many others.

Kathleen Supové is a Yamaha Artist. She performs in a wide variety of spaces, from concert halls, to theaters, to universities, to alternative galleries and clubs.

Audiences will have two opportunities to hear Supové again at The Flea.  Her program features music by some of New York’s most intriguing emerging composers, as well as original creations by Kathleen Supové herself. The latter works are called Secret Abstractions.