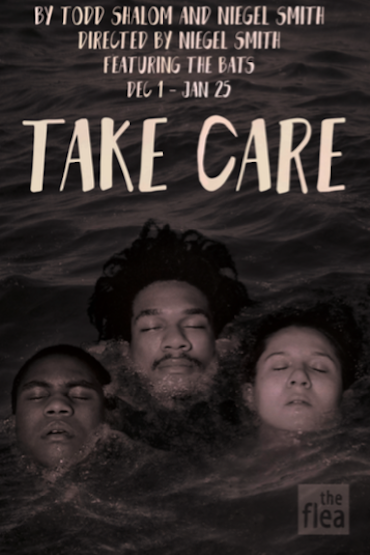 “I want to thank you, Todd, and The Bats for creating something special last night at The Flea. Take Care was a joy to watch and experience with so many different people. When theatre opens an insightful and provoking dialogue with the audience I become overjoyed. Instead of leaning back we lean in and truly take something away that can open up even more inspiring conversations for change and activism in our communities.”
-John S., Audience Member

Take Care is a participatory performance that investigates the ways we respond to present and imminent danger. This evening-length performance gathers and reconfigures our personal language around emergency preparedness, abandonment, and consolation. Niegel Smith writes: “I wanted to make a piece for our resident acting company, The Bats, that engages them as interpretive and generative artists. I invited my long-time collaborator Todd Shalom (Elastic City) to create a performance that explores The Bats’ most urgent personal and global concerns. So, we’re inviting theatergoers inside a vicious hurricane — a perfect storm to expose the ways we take care of and neglect one another.”

Take Care includes individualized prompts for audience participation alongside scripted moments for The Bats. Audiences will have the opportunity to choose their desired level of participation—they can be on stage or around it.

TODD SHALOM (Writer) works with text, sound and image to re-contextualize the body in space using vocabulary of the everyday. He is the founder and director of non-profit participatory walks organization, Elastic City. In this role, Todd leads his own walks, collaborates with artists to lead joint walks, and works with artists in a variety of disciplines to adapt their expertise to the participatory walk format. He often collaborates with performance artist/director Niegel Smith. Together, they conceive and stage interactive performances in public and private environments. Todd is also a ringleader of Willing Participant. Willing Participant whips up urgent poetic responses to crazy shit that happens.

Todd is a member of the core faculty in Pratt Institute’s new MFA in Writing. His work has been presented by organizations such as Abrons Art Center, Brooklyn Museum, The Invisible Dog, ISSUEProject Room, The Museum of Modern Art, The New Museum, P.S. 122 and Printed Matter. Todd is a graduate of the MFA Writing Program at California College of the Arts and also holds a B.S. in Business Administration from Boston University.

Smith was the associate director of the Tony Award winning musical FELA! – restaging that production in London, Lagos and its world tour, assistant directed the off-Broadway production of The 25th Annual Putnam County Spelling Bee and both the Broadway and off-Broadway productions of Tony Kushner’s Caroline, or Change. He has worked on the artistic staffs of The Public Theater, Trinity Repertory Company and Providence Black Rep. He is a 35th Anniversary Artist-in-Residence at Second Stage Theatre and the Associate Artistic Director of Elastic City.