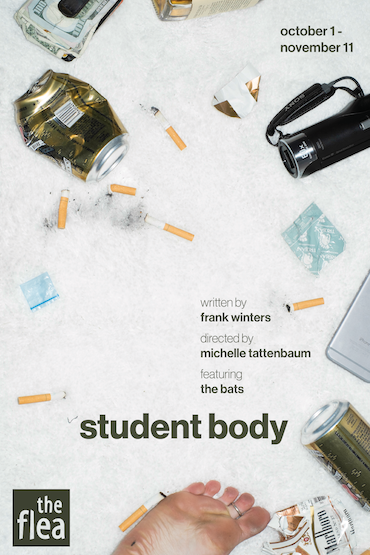 What happened at that party?

Ten college students locked in an intense moral argument over how to treat a sexual encounter that happened in their midst.
What would you do?

Student Body was originally commissioned, developed and performed at the Lee Strasberg Theatre and Film Institute in New York City as part of the Clifford Odets Ensemble Play Commission in December 2014 under the title The School Play.

FRANK WINTERS (Playwright) is a writer, director, and actor. His written works include Home Movies, On the Head of a Pin, and The School Play. He was the 2014 recipient of the Clifford Odets Ensemble New Play Commission through the Lee Strasberg Theatre and Film Institute. He is a graduate of the SUNY Purchase Acting Conservatory and a Co-Artistic Director of Strangemen & Company.

MICHELLE TATTENBAUM‘s (Director) previous projects at the Flea include Love/Stories (or But You Will Get Used To It) (world premiere) and F**ed (world premiere) both by Itamar Moses. She directed the world premiere of the musical Nobody Loves You at the Old Globe (San Diego Theatre Critics Circle nomination for Best Director) and the New York premiere at Second Stage Theatre. Other new musicals she has directed include Mother Jones and the Children’s Crusade at NYMF (Best Director, honorable mention). She directed and co-produced The Sublet Experiment, a site-specific touring production that played to sold-out crowds in New York City for over six months. Regionally, she has directed at the O’Neill Musical Theater Conference, the Hangar Theatre, Williamstown Theatre Festival, Goodspeed Musicals and the Shakespeare Theatre of New Jersey. Tattenbaum worked for Manhattan Theatre Club for three years, producing and developing new musicals including A Class Act (a production that transferred to Broadway) and Andrew Lippa’s The Wild Party. She is a two-time Drama League Directing Fellow. www.michelletattenbaum.com