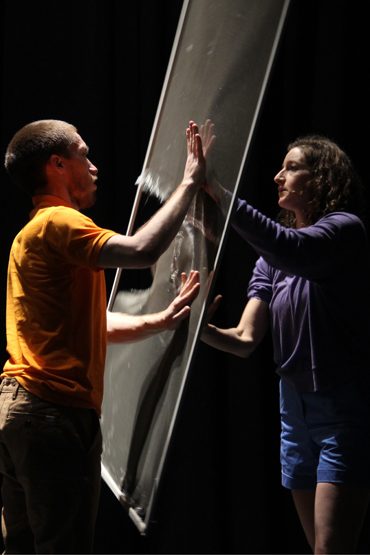 Described by Frolov  as “a truth or dare using a peach, a megaphone, two chairs, and a tablecloth,” Show No Show charts the process of two people getting to know each other for the first time. Unpredictable and entrancing, they use each other and the space to mine the complexities of opening oneself up to another, laying bare the hilarious, maddening, and heartbreaking feelings that come with it.

*Does not include $2 Theater Restoration Fee.
*VIP tickets include reserved seating (your name on the chair!) and unlimited drinks.

Revlock and Frolov met during a three-week residency at Omi International Arts Center in August of 2014 where they began developing this work. With additional residency support from Culture Mill and American Dance Festival it premiered in 2016 at FringeArts in Philadelphia, PA to sold out audiences and positive press. “Watching Show No Show at FringeArts is a pleasure,” wrote the Philadelphia Inquirer. ThinkingDance noted, “This final scene is all the more haunting because we want to see these two dancers on stage together.” A follow up performance occurred in April 2016  at Omi International Arts Center, as part of the center’s 25th anniversary celebration. In Russia the work was presented at Na Grani Festival of Contemporary Dance and Small Format Contemporary Dance Festival.

The title, Show No Show, came from Frolov and as Revlock puts it, “gets at the question ‘are we performing or are we not performing? If we are performing is it for the audience or for each other?” It also points to the disparate perspectives the two performers have within the piece, Revlock possessing a more outward focus, even checking in with the audience at points, and Frolov displaying little awareness of his performer status. As Revlock describes it, the audience will be flies on the wall, in close proximity but non-intrusive.

Revlock is a 2018-19 Anchor Partner with The Flea.  Anchor Partners are a select group of seven emerging companies who receive subsidized rental rates, consistent access to one or more of The Flea’s spaces, plus tech, marketing, and producing support.

Gabrielle Revlock is a dance-maker working out of Philadelphia and New York. She is known for her work with the hoop and her “inventive,” “rambunctious,” and “mesmerizing” choreography. Presenters include American Dance Festival, JACK, Gibney Dance Center, FringeArts, Joyce SoHo, and Annenberg Center for the Performing Arts. Internationally she has performed in Japan, Netherlands, Singapore, Hungary and Russia. Her work has been supported by The Pew Center for Arts & Heritage, Independence Foundation, a LAB Fellowship through FringeArts, PA Council on the Arts, SCUBA National Touring Network for Dance, Puffin Foundation and the US Department of State. In 2011 she won a finalist prize at The A.W.A.R.D. Show. Choreographic residencies include Chez Bushwick, Elizabeth Streb’s GO!, LiftOff, Dance Omi, Culture Mill in cooperation with American Dance Festival and New York Live Arts’ Fresh Tracks. As a dancer, she has performed for Lucinda Childs, Leah Stein, Jumatatu Poe, Susan Rethorst, Christopher Williams, Bill Young, Jody Oberfelder, and is a company member with Jane Comfort and Company. Revlock has taught at The Fabric Workshop and Museum, American Dance Festival, Barnes Foundation, Abrons Arts Center, and The Philadelphia School among others. Interested in bridging experimentation and populism, she created the online video “So You Think You Can’t Understand Contemporary Dance?,” a two-minute conversation with her favorite five-year-old. Gabrielle holds a BA in Art History from Vassar College. GabrielleRevlock.com

Aleksandr Frolov is a contemporary dancer, choreographer and teacher based in Yekaterinburg, Russia. His 20+ works have been presented throughout Russia and he is frequently commissioned to create dances for other companies including the Yekaterinburg Opera and Ballet Theatre. For the 2017-18 season he is the resident choreographer at the Chamber Theater in Yekaterinburg. His work has been presented in Russia at festivals including Tsekh (Moscow), Open Look (St. Petersburg), Art Forum (Krasnoyarsk),and  Diversia (Kostroma). Internationally he has toured to France, Taiwan, Finland, and the USA. Residencies include Omi International Arts Center and the International Choreographers Residency at American Dance Festival. His work has received numerous prizes including Winner of IX All-Russia Festival of Modern Dance, Grand Prix winner at the VIII All-Russia Festival of Modern Dance, and a special jury prize from the regional theatrical award “Bravo” in 2011 for his work Chocolate. In 2013 he was a finalist in the program “Workshop of Modern Choreography” for the Platform Project in Moscow. In 2015 and 2016 he was nominated for a “Bravo” in the category Contemporary Dance / The Best Performance. Since 2016 his work has been nominated for a Golden Mask, the most prestigious award for performance in Russia. In 2016 for My love / My Life and in 2017 for Essence. For the 2017 season the Golden Mask has also honored him with a nomination for Best Male Dancer. www.dancezonka.com

Click Here to read an interview with Gabrielle and Sasha.