Oh, the Humanity and other exclamations

By Will Eno
Directed by Jim Simpson 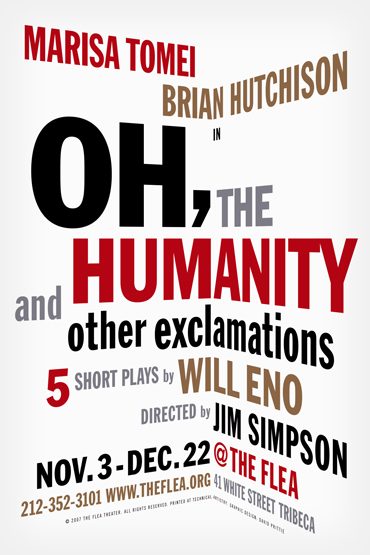 The Flea Theater announces the extension of its critically acclaimed Off-Broadway production of Oh, The Humanity and other exclamations. This World Premiere by Pulitzer Prize finalist Will Eno is directed by Jim Simpson. Originally scheduled to end December 22, performances have been extended throuth February 2, 2008.

Oh, The Humanity and other exclamations is five short plays about people like you, facing lives like yours. About life, in a word. Not suitable for children. The five pieces include: Behold The Coach, In Sorrow, Uninsured; Ladies and Gentlemen: The Rain; Enter the Spokeswoman, Sideways; The Bully Composition and Oh, the Humanity.

Will Eno garnered international attention with Thom Pain (based on nothing), which played to acclaim in London, Edinburgh and New York and was a finalist for the Pulitzer Prize for Drama. Charles Isherwood of The New York Times hailed Eno as “a Samuel Beckett for the Jon Stewart generation.” Eno’s other plays include Tragedy: a tragedy, The Flu Season, Kid Blanco, King: a problem play, and an adaptation of Ibsen’s Peer Gynt. In November 2007, he was awarded the National Arts Club’s Kesselring Honor.

Performances, which have been extended through February 2nd, will be Tuesday through Saturday evenings at 7:00PM, and Saturday matinees at 3pm. Running time is 1 hour.