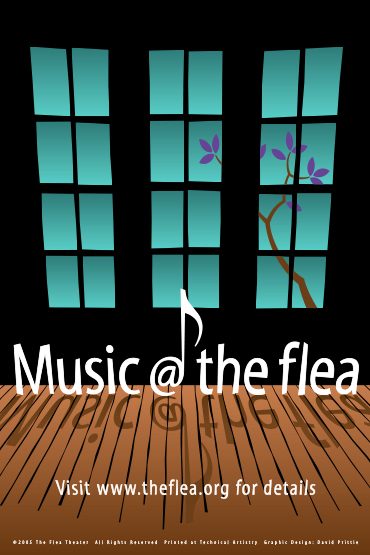 The Flea Theater is delighted to announce Music @ The Flea.

Gene Pritsker
will offer two programs:
Varieties of Religious Experiences Suite
May 29 at 7pm
Sound Liberation and B3+
May 30 at 7pm

PRESS about Lisa Karrer and David Simons
“Lisa Karrer’s voice carries beyond the packaged wisdom of an emotionally recovering culture into a lessonless sublime.” Village Voice

“By using the voice without any limits and playing obscure instruments, the New York Perfromance Artist Lisa Karrer and the Experimental Musician David Simons showed quite clearly where the development of future art direction should go.” Allgemeine Zeitung, Germany

PRESS about Gene Pritsker
“Pritsker’s music is not designed for easy listening or to melt into the background. It is insistent. It demands attention and curiosity.”- Chuin-Wei Yap, New York Newsday

“Pritsker dissolves the artificial boundaries between high brow, low brow, classical, popular musics and elevates the idea that if it’s done well it is great music, regardless of the style or genre.”- Joseph Pehrson, The Music Connoisseur

May 30th
Gene Pritsker’s Sound Liberation and B3+

Lisa Karrer is a composer, vocalist, video and performance artist, and collaborates with numerous artists and ensembles. Over the years she has received many grants to support her projects in the U.S. and abroad, including tours to Estonia, Western Europe, Israel and Indonesia. She has produced CDs for the ensembles Music For Homemade Instruments and Gamelan Son of Lion, and with co-composer David Simons recorded and released their chamber opera “The Birth of George” on Harvestworks’ TELLUS label. Two of her compositions for gamelan orchestra appear on Sonogram, Gamelan Son of Lion’s new double CD on Innova Records. Other large-scale works include Puhamu, a collaborative multimedia project premiered in Estonia, her multi-arts wayang opera “Woman’s Song: The Story of Roro Mendut”, co-produced by the Kitchen and the World Music Institute, and Schismism pt 1: Fractured America premiered at The Flea Theater’s Music With a View series. Schismism pt 2: Natural Law had its premier run at the Living Theatre in NYC in October 08. Lisa continues to develop multimedia performances such as Mary’s SITE, based on the animated sculpture of visual artist Mary Ziegler, which premiered in February 09 at ROCA/Rockland Center for the Arts, and will be included in an upcoming performance/video installation in July 09 at AI.R. Gallery in Brooklyn. For more info visit http://www.simons-Karrer.com

David Simons is a composer and performer specializing in percussion, Theremin, electronics,homemade instruments, and World Music. Recordings of his works include the CDs “Prismatic Hearing” (Tzadik); the opera “The Birth of George” (Tellus/Harvestworks) w/Lisa Karrer; Kebyar Leyak and Cool it Wayang for Gamelan Son of Lion (their 2009 release on INNOVA includes Naked We Stand); and on albums by God is My Co-Pilot, Stockhausen, Shelley Hirsch, Music for Homemade Instruments, and many others. David’s work in music for theater and dance has brought him to Zagreb and Tallinn, Seoul and Yogyakarta, Munich and Berlin, Guantanamo, Honolulu, and Bali. He has been awarded a Rockefeller Bellagio residency, NYFA fellowships, commissions from American Composers Forum, MaryFlagler Cary, Meet the Composer; travel grants from Artslink and Arts International.Simons’ composition “Odentity” for the Harry Partch instruments was premiered by Newband in 2007.David is a graduate of California Institute of the Arts. His writings on music and sound are published in Radiotexte(Semiotexte#16), EAR magazine and Soundings.

Lisa Karrer and David Simons perform their own compositions for Indonesian Gamelan, Homemade Instruments, Western orchestra, theremin, sampler, computers, performance installation, opera and new music theater, as well as acoustic and electronic arrangements of Estonian, Bosnian, Yiddish, Thai, and other deconstructed world music pieces. They have received numerous grants, commissions and travel awards to perform their operas and other works in New York City, Hawaii, Indonesia, the Baltics, and throughout Eastern and Western Europe.

Composer/guitarist/rapper Gene Pritsker has written over three hundred compositions, including chamber operas, orchestral and chamber works, electro-acoustic music, songs for hip-hop and rock ensembles, etc. All his compositions employ an eclectic spectrum of styles and are influenced by his studies of various musical cultures. He is the founder and leader of Sound Liberation; an eclectic hip-hop/chamber/jazz/rock/etc. ensemble. Other organizations he is associated with include: Composers’ Concordance, Absolute Ensemble, The international Street Cannibals. Some of Gene Pritsker’s music is published by: Falls House Press, Gold Branch Music, Periferia Sheet Music & Calabrese Brothers music and recorded by: Col Legno, Enja, Eutrepe, Wergo and Capstone record labels. http://www.genepritsker.com

Kathleen Supové (Curator) is one of America’s most acclaimed and versatile contemporary music pianists. She regularly presents a series of solo concerts entitled The Exploding Piano, in which she has performed and premiered works by the world’s leading composers as well as countless emerging ones. The Exploding Piano is a multimedia experience that employs theatrical elements, vocal rants, performance art, staging, electronics, and collaboration with artists from other disciplines. Kathleen has appeared with The Lincoln Center Festival, The Philip Glass Ensemble, Bang On a Can Marathon, Music at the Anthology, The Bill T. Jones/Arnie Zane Dance Company, and other venues, ranging from concert halls to theatrical spaces to clubs. Her most recent CD is INFUSION, released on the International Classics label, which features music for solo piano and electronics. Other recordings can be found on the Tzadik, CRI, Innova, New World, Neuma, Bridge, Centaur, OO, and XI labels. Recently, she appeared in Carnegie Hall, in the historic performance of Terry Riley’s IN C, curated by the Kronos Quartet. Visit www.supove.com and myspace.com/supove for more information about concerts and projects.

Admission is $20. Tickets may be purchased by clicking the red TIX button above, by calling 212-352-3101, or in person at the Box Office, which opens one hour prior to show time.