Mercy on the Doorstep 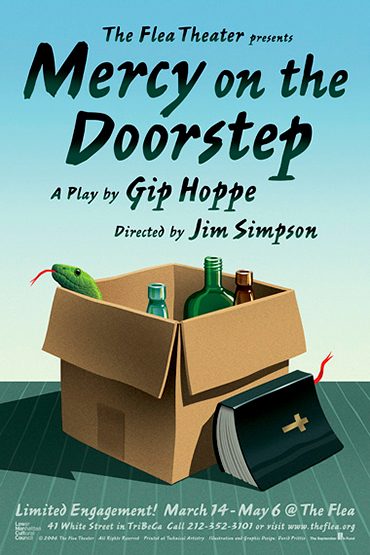 THE FLEA THEATER
Premieres a New Drama by Gip Hoppe

“Hoppe has achieved that rare amalgam: a comic drama that entertains even as it stimulates debate… this play ought to be required viewing” — The Boston Globe

The Flea Theater presents the New York Premiere of MERCY ON THE DOORSTEP by Gip Hoppe. Coming off a successful run at the Wellfleet Harbor Actors Theater in Cape Cod, this dark comedy earned raves from the Boston Globe and the Cape Cod Times. Flea Artistic Director Jim Simpson directs. Produced on an Off-Broadway contract, previews begin March 14 with opening night scheduled for March 23.

MERCY ON THE DOORSTEP tells the story of Corrine and Rena, an alcoholic widow and her born-again, right-wing stepdaughter. This mismatched pair must learn to co-exist in the house that Corrine’s husband left behind. It is a story about hope, redemption, and the ability for even the most disparate of philosophies to find a common ground.

Gip Hoppe is the author of fifteen plays including Jackie: An American Life, Cuckooland, Savior of the Universe and Ruby Tuesday. His plays have been performed on and off Broadway, London’s West End, The State Theater of Germany and regional theaters across the U.S. His play A New War won the prestigious Elliot Norton Award in Boston and was produced at The Long Wharf Theater in New Haven. Gip is a founding member of Wellfleet Harbor Actors Theater (W.H.A.T.) on Cape Cod.