Love/Stories (or But You Will Get Used To It) 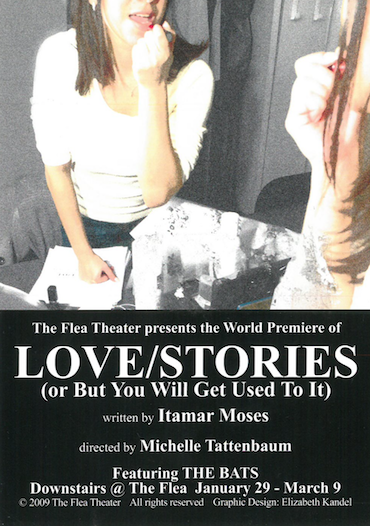 Critics and Audiences are in LOVE

“The fun of going to productions by the Bats, the youthful company of the Flea Theater, is the prospect of seeing unknown actors really make an impression when given the chance to tackle substantive roles. Five get that opportunity in ‘Love/Stories,’ and none waste it. Oh, go ahead, say it: They bat a thousand!“ – Neil Genzlinger, New York Times

“Mr. Moses has given us the smartest mixed bill of one-act plays to come along since David Ives’s “Mere Mortals and Others.” Is there anything he can’t do?”- Terry Teachout, Wall Street Journal

“For those prone to delight, Love/Stories is a revelation!” – Sam Thielman, Variety

“Moses has a keen eye for human feelings. There’s something innately relatable within these plays— starring The Flea’s resident company, The Bats (all doing bang-up work).” – Nytheatre.com

“These thematically connected playlets showcase the expert comic talents of the Bats, and ..you don’t need a stimulus plan to pay for a ticket to the downstairs space that puts everyone in a premium seat!” – CurtainUp.com

The Flea Theater presents the World Premiere of Itamar Moses’ LOVE/STORIES (or But You Will Get Used To It), a collection of five short new plays. Moses is the author of The Four of Us, Bach at Leipzig, Back Back Back and Celebrity Row.

A casting session for a play about a love affair goes awry. A talk-back with a theatre audience becomes the occasion for a life-altering choice. A couple moving in together finds that greater intimacy can have surprising results. Nothing is what it seems in these five funny and poignant short plays.

Says playwright Moses, “Theater is so much closer to music than it is to fiction and so, in a way, only ever writing full-length plays is like only ever writing concept albums, or Handel’s Messiah. But a short play is like a single. And the short form is one of my favorite things to write. The problem though, is that these plays often have no real life, or they run for one weekend, once, and disappear, and they become the homeless orphaned bastard children of a playwright’s oeuvre. I’m thrilled that The Flea has entrusted me with their terrific young acting company and given these five bastards orphans of mine a home.”

Itamar Moses is the author of Outrage, Bach at Leipzig, Celebrity Row, The Four of Us, Yellowjacket, Back Back Back and Completeness, Reality! (a musical with Gaby Alter), and Fortress of Solitude (a musical with Michael Friedman and Daniel Aukin), and various short plays and one-acts. His work has appeared Off-Broadway and elsewhere in New York, at regional theatres across the country and in Canada, and is published by Faber & Faber and Samuel French. He has received new play commissions from The McCarter Theater, Playwrights Horizons, Berkeley Repertory Theatre, The Wilma Theater, South Coast Rep, Manhattan Theatre Club, and Lincoln Center. Itamar holds an MFA in Dramatic Writing from NYU and has taught playwriting at Yale and NYU. He is a member of the Dramatists Guild, MCCPlaywrights Coalition, Naked Angels Writers Group, and is a New York Theatre Workshop Usual Suspect. He was born in Berkeley, CA and now lives in Brooklyn, NY.

Director Michelle Tattenbaum’s previous collaborations with Itamar Moses include the Los Angeles premiere of The Four of Us; The Chromium Hook for Manhattan Theatre Club and Lincoln Center Directors’ Lab; Reality! for the Cape Cod Theatre Project; and several short plays for Manhattan Theatre Source and Naked Angels. Her directing credits include The Sublet Experiment, Gallathea at Here; An Archipelago of Clouds at FringeNYC; and Guyler Beguiled at the Maverick Theater. Regionally, she has directed at the Hangar Theatre, Williamstown Theatre Festival, Goodspeed Opera House, New London Barn Playhouse, Women’s Theatre Company, and Shakespeare Theatre of New Jersey. She is a two-time Drama League Directing Fellow

Performance times vary, see Calendar. Tickets are $20 and can be purchased using the link above. The running time is 1 hour and 30 minutes without intermission. Please note there is no late seating.