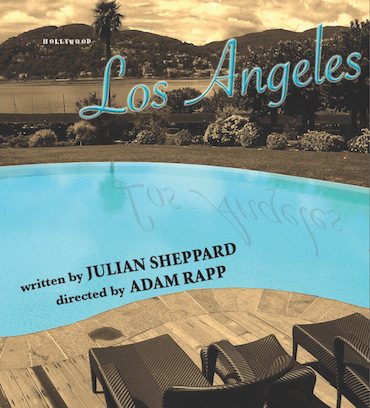 Sex. Drugs. Swimming Pools. Traffic. Smog. Carjackings. The search for the next big thing. This is Los Angeles, where one damaged young woman needs more than a map to find her way through the pitfalls of Tinseltown.

Los Angeles stars Katherine Waterston (daughter of Sam Waterston) with The Bats, the resident acting company at The Flea. The production features set by David Korins, lighting by Miranda Hardy, sound by Eric Shim and costumes by Erika Munro.

Julian Sheppard’s Buicks received two 2003 Drama Desk nominations, including Outstanding Play. Buicks was recently optioned by Paramount Studios as a sitcom for CBS. His other plays include Love and Happiness, Whatever, After America, A Hole in the Earth and From Now On. Julian’s plays have been produced in New York at Soho Rep, Blue Heron Arts Center, Cherry Lane Alternative, MCC Performance Lab, and New York Performance Works, among others. He has received two Le Comte de Nouy Awards and is a three-time finalist for Actor Theatre of Louisville’s Heidemann Award. A head writer on ESPN’s “2-Minute Drill,” Julian is a graduate of the playwrighting program at Juilliard. He is currently working on a stage adaptation of Stephen King’s Misery.

Adam Rapp is a novelist, filmmaker, playwright and director. In 2006, he was named a finalist for the 2006 Pulitzer Prize for his play Red Light Winter. His other plays include Nocturne, Blackbird, Stone Cold Dead Serious, Finer Noble Gases, and Faster. His work has been presented internationally at theaters including The Bush, London; Pittsburgh City Theatre; Humana Festival, Rattlestick, Steppenwolf, New York Theater Workshop and Barrow Street Theater. As a director, his production of Blackbird received two Drama Desk nominations. His production of Red Light Winter won the Joseph Jefferson Award in Chicago and a Lucille Lortel Nomination for Best New Play and two Obie Awards in New York. His production of Finer Noble Gases at the 2006 Edinburgh Festival received a Fringe First Award. Rapp’s first feature film Winter Passing received its world premiere at the 2005 Toronto International Film Festival and was released in February. He is currently in post-production with his second feature, Blackbird.