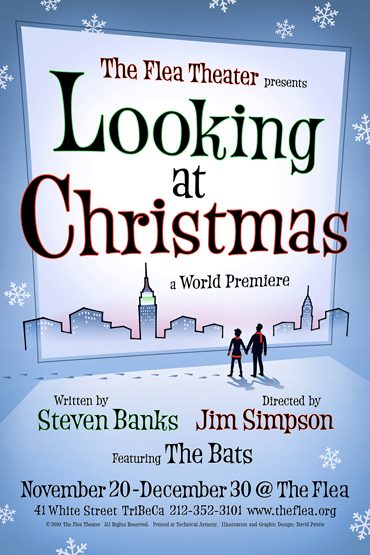 Our holiday hit LOOKING AT CHRISTMAS will be shown on Thirteen – WNET NY and its tri-state affiliates:

Check wnet.org for your local listings.

Praise for Looking at Christmas

One of New York City’s Top 5 Holiday Showson Broadway and Beyond. -City’s Best

During this season in New York, brightly lit in red and green, but plagued with shallower pockets, it is worth a trip to the Flea for a little laughter and art…Once again the Flea is doing something right and good in milieu of the New York theater scene. -Showbusiness Weekly

The quintessential New York Christmas production – and in an entirely wonderful way. Even if you are a bit of a Scrooge, there is something to snicker with in this show. The perfect play if you want to a smile, laugh and give your partner a warm embrace. -Reviews Off-Broadway

For audiences seeking a Christmas holiday show with a sly and witty New York point of view, Looking At Christmas is just the ticket. A real treat! -Theaterscene.net

Original, brash and bursting with theatrical energy! For that special someone who has everything, the irreverent but charming characters and occasional pokes at tradition in Looking at Christmas make this play a very good gift.-NYTheater.com

About Looking at Christmas

Christmas Eve. New York City. A failed writer and a struggling actress meet while looking at the famous holiday windows and the windows come to life and look back at them! Including a lecherous elf with eyes for Mrs. Claus, an alien Scrooge arguing with an android Tiny Tim about reinterpreting classic Christmas stories, a pissed off Little Match Girl, Jim from The Gift of The Magi enjoying the fact that his newly shorn wife resembles a boy, a vapid Russian model trying to hook up with a snowman and a jealous Joseph The Carpenter, step-father of you-know-who … The Bats star in this sweet, smart and slightly twisted romantic comedy.

According to Artistic Director Jim Simpson: “At The Flea, we are always looking for something different — and the holidays are no exception. Having the head writer from SpongeBob Squarepants take on Christmas, New York, and holiday windows fits the bill.”

The Cast and Company

Steven Banks is the Emmy Award-nominated head writer of “SpongeBob Squarepants”. He recently co-created a full evening piece, Shadowland, for the renowned dance company Pilobolus. He wrote and starred in the critically acclaimed one-person play Home Entertainment Center on Showtime and performed it in Los Angeles and San Francisco, winning LA Weekly, Dramalouge and Bay Area Critic’s Circle Awards. Steven also wrote and starred in the national PBS series “The Steven Banks Show” and released a CD, “Songs from The Steven Banks Show”. His first novel, King of the Creeps, was published by Random House/Knopf. His play, Love Tapes, co-written with Penn Jillette, was nominated for three LA Weekly Theater Awards, winning Best Direction of a Comedy. He wrote the book and additional lyrics for the musical The Sponge Who Could Fly, currently touring internationally. Steven is a drop out of Los Angeles City College and a graduate of the Ringling Brother’s & Barnum and Bailey’s Clown College.

The playwright will give a Talk-Back after the show on December 28.

Pay-What-You-Can tickets are available at the door only, starting at 6pm each Tuesday performance. Limit one ticket per person.