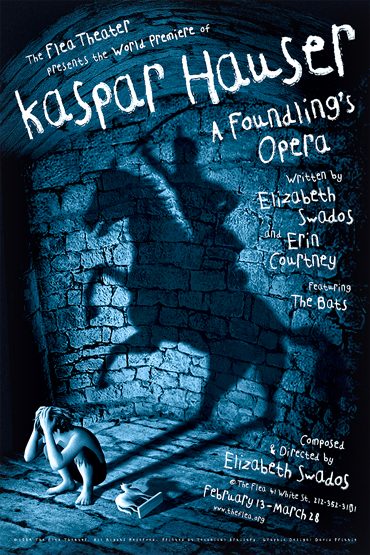 “The legend of Kaspar Hauser is given a joyfully grotesque outing in Swados and Courtney’s light opera. The Bats, the Flea’s young resident company, relish each vinegary moment of their melodramatic take on the tale. Preston Martin is captivating in the title role, imbuing his Kaspar with the freaky allure of a German Edward Scissorhands. With its bright period garb and ghoul-faced ensemble, the show could easily inhabit a larger stage; condensed to the modest parameters of The Flea, it glows all the more brightly.” – New Yorker

“Swados’ music is beautifully sung by the Bats. Preston Martin plays Kaspar with complete conviction and fascinating intensity. Highly entertaining, beautifully performed, and well worth the price of admission. The production is superb!” – TheatreOnline.com

“Hypnotic, disturbing, and fascinating! Well worth a look.” – BroadwayWorld.com

“The play packs a visceral punch! Its lush and punchy score plays like the bastard child of Kurt Weill and Stephen Sondheim. Kaspar Hauser is structurally seamless and very moving.

By now, the energy and dedication of the famously quirky young Bats should be surprising to no one. What does surprise is their powerful singing, as they display vocal chops you simply don’t expect to find downtown. The musical climaxes are enough to make your hair whoosh back!” – Nytheatre.com

At $25 (general seating, with not a bad seat anywhere), I dare you to find a better bang for your economy squeezed buck.” – CurtainUp.com

Three years in the making, KASPAR HAUSER: a foundling’s opera has literally turned The Flea Theater around! This true tale about “Germany’s orphan”, a celebrity scandal in Europe almost 200 years ago, has tempted many of the best creative minds, including filmmaker Werner Herzog and The Who. Now, Tony-nominee and Obie-winner Elizabeth Swados, together with Erin Courtney of the Obie-winning 13P playwrights company, join forces with some of downtown’s top designers to transform The Flea for a beautiful, elaborate 20-person music theater event. Visually, aurally and emotionally – KASPARHAUSER will rock you!

Commissioned by The Flea in 2006, the piece marks Swados return to The Flea, where she previously created the long-running hit JABU.

Says Swados, “KASPAR HAUSER is a musical theater piece, you might call it an opera, somewhere between Beethoven and Queen, and it only could be done in its first version at the Flea, a theater that is both brave and strict about quality. And then there are the amazing Bats, a repertory company of highly energetic and talented actors who also sing with voices that range from Janis Joplin to Bjork to John Mayer. The Flea is an artistic home where anything can happen.”

Elizabeth Swados has composed, written, and directed over 30 theater pieces including The Trilogy, Nightclub Cantata, Runaways, Alice in Concert, Doonesbury, Rap Master Ronnie, The Haggadah, Jonah, Job, Esther, Jerusalem with Yehudah Amichai, The 49 Years, and Missionaries. Her work has been performed on and off Broadway at venues including The Flea, La MaMa, The Public Theater, Manhattan Theatre Club, Brooklyn Academy of Music, Carnegie Hall and at locations all over the world. She has published novels, non-fiction books, children’s books and poetry. Recent productions include Atonement, a theatrical oratorio presented by the Cathedral of St. John the Divine; her own adaptation of S. Ansky’s The Dybbuk at NYU/Tisch; Spider Operas at PS122 (with Mabou Mines); and Political Subversities, a political revue at both The Culture Project and Joe’s Pub. My Depression: A Picture Book, was published in April 2005 and her theater textbook, At Play: Teaching Teenagers Theater, was published in June 2006. A new book of poetry, The Handcuff King, will be published by Hanging Loose Press this fall. Ms. Swados recently wrapped a children’s CD, Everyone is Different, in conjunction with Forward Face in March, 2007. Awards: Five Tony nominations, three Obie Awards, Guggenheim Fellowship, Ford Grant, Lila Acheson Wallace Grant, PEN Citation, and others. Most recently Ms. Swados received a special grant to record selections from all of her music from over the past thirty years. These new renderings of her music will be available on CD and the Internet over the next three years.

Erin Courtney’s plays have been produced or developed by Clubbed Thumb (Alice The Magnet, Demon Baby, Pricked, Summer Play, Downwinders), The Public Theater (Demon Baby), The Flea (Mother’s Couch), The Actors Theater of Louisville (Owls), The Vineyard (Alice The Magnet). Quiver and Twitchwas produced at New York Stage and Film at Vassar in 2006. She is currently writing a new play, Black Cat Lost, that has been commissioned by Soho Rep. She has been a resident at the MacDowell colony, a recipient of a NYSCA grant and a MAP Fund grant from the Rockefeller Foundation. Demon Baby is included in the anthology “New Downtown Now” edited by Mac Wellman and Young Jean Lee, published by University of Minnesota Press. She is an affiliated artist with Clubbed Thumb, a member of the Obie award winning collective 13P, as well as the co-founder of the Brooklyn Writer’s Space. MFA, Brooklyn College. BA, Brown University.

The performance runs 1 hour and 35 minutes with a ten-minute intermission. Please note there is no late seating