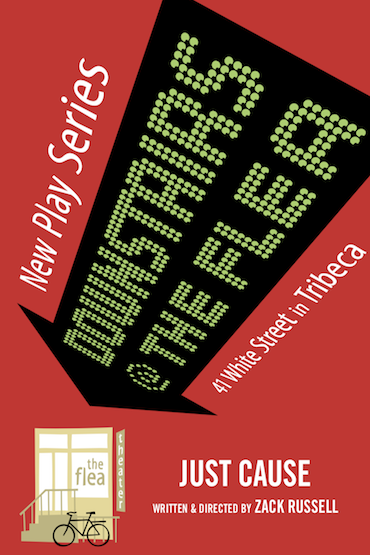 “Deserves to be seen as an example of how a cast and crew can live up to a play’s complex literary and staging demands in order to produce a unique piece of theater that is quite often nothing short of being breathtaking. In addition to the brilliant staging, it is the fully realized and heartfelt performances that anchor this play. Exhilarating!” –NYTheatre.com

“The acting here, by the Flea’s very talented repertory company, is strong and relaxed.” – The New Yorker

“Offers a humorous look at a generation looking for their own revolution and direction.” – Theatre Is Easy

“The charades of these young people evolve from real games to a kill-or-be-killed scenario in which bullets are distributed like candy.” –Backstage

Director’s Note: Just Cause is both a comment on my generation and a response to Rainer Werner Fassbinder’s wonderful film The Third Generation. Heavily inspired by the film, I was motivated to explore Fassbinder’s expressions of terrorism, delusion and alienation in a fresh American context. Improvisation and group discussion with the cast were essential parts of the development process.

Next in line for the New Play Series, The Flea Theater is proud to present the World Premiere of JUST CAUSE, marking the debut of Flea Resident Director ZACK RUSSELL. The play is also written by Mr. Russell, and features The Bats, The Flea’s acclaimed resident company of actors. Previews begin May 6, with opening night slated for Thursday, May 19. All tickets only $20.

What is freedom, and how can I get some? JUST CAUSE is a subversive comedy that follows a group of young revolutionary Brooklynites seeking violent change. Armed with iPhones, handguns, and inherited ideals, these would-be terrorists are determined to find meaning—by any means necessary.

“Watching recent events in Egypt, Libya and Tunisia, I couldn’t help but wonder if American youth today would ever have the same capacity for revolution,” states Russell. “JUST CAUSE is a response to the discordant angst, apathy, and absurdity I sometimes see in my generation.”

Russell is one of The Flea’s Resident Directors, four young artists who joined Artistic Director Jim Simpson at the helm for the 2010/2011 season. In January, The Flea Theater kicked off the New Play Series with Trista Baldwin’s AMERICAN SEXY, directed by resident director Mia Walker, which The New Yorker called “strong and convincing — and brought to life with total commitment.”

“The Flea is delighted to present another of our young Resident Directors’ work,” says Producing Director Carol Ostrow. “Zack brings his sharp skills as a writer/director to bear on this exploration of idealism, radical politics and hipster culture. We are honored to introduce another excellent young director to the Indie theater community.”

Zack Russell is a Canadian theater director/writer currently based in New York. Over the past three years, he has directed his own work at theaters in Montreal, Toronto and Berlin. In February 2010 Zack directed his piece Parole, Parole at the Buddies in Bad Times Theatre in Toronto. This is Zack’s New York City debut.