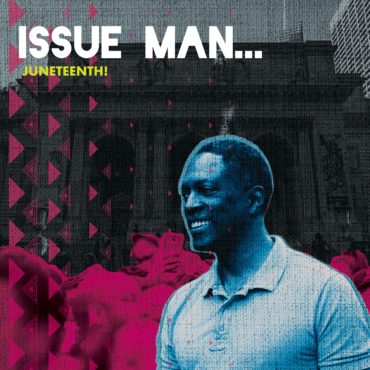 Appearing on the steps of the New York Public Library wearing a sandwich board touting JUNETEENTH information, experience ISSUE-MAN up close and personal as he engages in conversation about Juneteenth, race, racism, and more. Special gifts and cash rewards for a brave few! 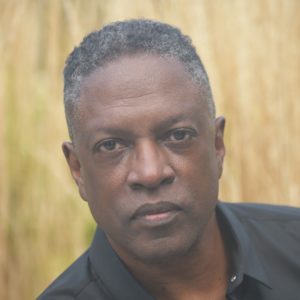 ABOUT JAMES SCRUGGS
James Scruggs is a writer, performer, producer, teacher, speaker and arts administrator who creates large scale, topical, theatrical, multi-media work usually focused on inequity or gender politics. He is currently working with Rattlestick Theater to produce BRAVADO, a transmedia piece that will be experienced virtually, exploring viruses, mortality and 9/11. His work in progress version of A Voluptuary Life was a solo performance work about one man musing same gender loving lives across the ages. It was shown at HERE Arts Center, NYC in March, 2019. MELT !, was a site specific, fully immersive work with actors musicians and radical audience participation. It was commissioned and performed for one day on The High Line in NYC. “It’s The Annual Post Racial America Day Rally!” It’s May 17, 2060! White people in America have been a minority for 17 years. The Mixed Race, gender fluid president of USA, who refuses to disclose birth gender or race has come to speak. Trapped in a Traveling Minstrel Show is an intimate piece exploring race through the lens of a deconstructed minstrel show structure premiered in Boston on November 3-11, 2017. It is largely about the fact that in 2017 actual dashcam and documentary footage of unarmed black men police shootings have become completely subjective, and must be ‘white-splained’ to black people to see how the officers feared for their lives. His piece, 3/Fifths SupremacyLand was a “Must See” production in The NY Times; Timeout stated: “The insidious brilliance of SupremacyLand lies in the way that Scruggs, co-opts the conventions of immersive theater to deliver a powerful message.”It premiered and ran for the month of May, 2017 at 3LD Art & Technology Center in NYC. He conceived, wrote and produced the fully interactive 3/Fifths, which enlisted over 30 collaborators, 23 actors, 46 channels of video, spread over 5 performance spaces spanning over 10,000 square feet. It was inspired by Disposable Men, his 2005 multi-media solo performance work, which juxtaposed images from Hollywood monster movies with the harsh reality of the historical treatment of black men in America. It was produced by HERE Arts Center. Previous theatrical works include Touchscape, An Emotional Striptease; Tickets To Manhood and Deepest Man, an experimental work with a 3D holographic projection surface exploring freediving as a cure for grief produced by and premiered at 3LD Art &Technology Center. He is currently a Fieldwork facilitator for The Field and a Professional Development Program facilitator for Creative Capital. James Scruggs has a BFA in Film from School of Visual Arts.