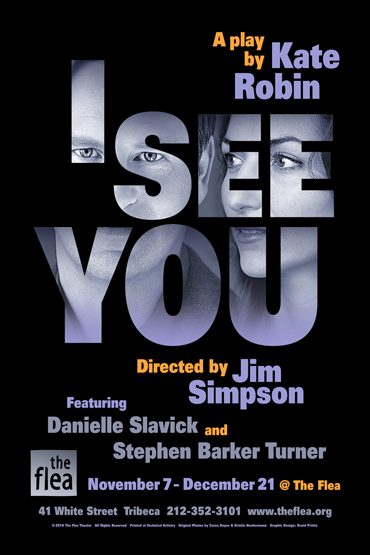 A disengaged stay-at-home dad and an apocalyptically anxious mom meet in this illicit rom com that spins out of control. In a world headed for disaster, what are the rules?

“I See You is really about the psychic and emotional stress of living in the cusp of the apocalypse – which is sort of where we are,” says Robin who is returning to The Flea for her second production following The Light Outside.

Kate Robin (Playwright, I See You) Theater: What They Have (South Coast Rep.) Anon. (Atlantic Theater Co.), Intrigue With Faye (MCC & New York Stage & Film), The Light Outside (The Flea), Swimming In March (The Market Theater, winner IRNE Best Play of 2001 award), Bride Stripped Bare (ThreadWaxing Space), Given Away(Playwright’s Collective). Her plays have been commissioned and developed at SCR, MTC, Playwrights’ Horizons, New York Theater Workshop, The Atlantic Theater Co., The Eugene O’Neill National Playwrights’ Conference, JAW/West at Portland Stage, and EST. I See Youwas commissioned by South Coast Rep. Television & Film: Six Feet Under(writer/supervising producer) and Coming Soon. Currently Kate is a writer and co-executive producer of The Affair, on Showtime this fall. She is also developing a pilot for HBO. Kate received the 2003 Princess Grace Statuette for playwriting and is an alumna of New Dramatists.

Jim Simpson (Director, I See You) was a child actor in his hometown of Honolulu, as a teenager worked with Jerzy Grotowski in Poland, and holds degrees from Boston University School for the Arts and the Yale Drama School. He’s worked at many venues in New York City, Nationally and Internationally. Drama Desk cited for Downtown Adventurous Theater, Two-time OBIE-award winner, National Board of Review Excellence in Filmmaking, and cited for artistic leadership in Downtown New York by the Lower Manhattan Cultural Council.

Stephen Barker Turner most recently appeared in the Off-Broadway premiere of Rajiv Joseph’s The North Pool at the Vineyard. Other premieres include David Adjmi’s The Evildoers, Dead Accounts and The Scene (both by Theresa Rebeck), After Ashley, and Compulsion by Rinne Groff, directed by Oskar Eustis with Mandy Patinkin. Other New York theatre: Benefactors (Keen Company), Richard III, Measure For Measure, and All’s Well That Ends Well (all NYSF), Race (CSC), and All My Sons (Roundabout), among others. Regional: Arena Stage, Yale Rep, Long Wharf, The Denver Center, Williamstown, A.C.T., Humana Festival, Cal Shakes, and NY Stage and Film, among others. TV: Body of Proof, Blue Bloods, all three Law and Order franchises, Hack, Sex and the City, and Swift Justice, among others. FILM: Blair Witch 2, Cosmopolitan, Machiavelli Rises, Human Resources, The Warrior Class, We Pedal Uphill, and Seducing Charlie Barker (based on Theresa Rebeck’s The Scene, 2011 Tribeca Film Fest), among others. Stephen is a graduate of The Juilliard School, and a Fox fellow.