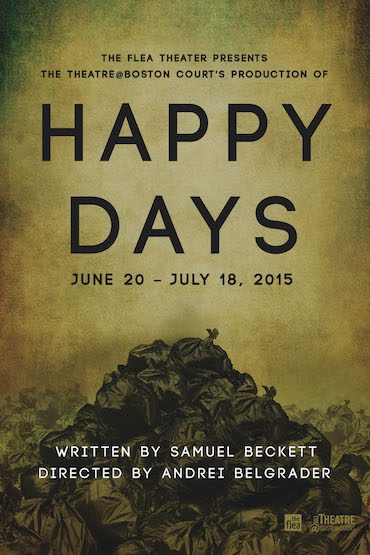 Brooke Adams gives “one of the best performances I’ve seen all year… Shalhoub makes a vivid impression.”
–The Boston Globe

Join us for the New York remount of The Theatre @ Boston Court’s production of HAPPY DAYS by Samuel Beckett. After critically acclaimed runs in Boston and LA, we welcome theater veterans Brooke Adams and Tony Shalhoub (The Mystery of Love & Sex) as they bring HAPPY DAYS to The Flea Theater.

Renowned director Andrei Belgrader re-examines this Samuel Beckett classic, newly relevant to a generation burdened by climate change and environmental doom. Brooke Adams plays Winnie, a woman buried up to her bosom in a mound of dirt with nothing to pass the time but the ragged contents of her bag, her nimble wit, and her husband Willie, played by Tony Shalhoub, lurking somewhere behind her. This droll, existential allegory demonstrates the vitality of the human spirit in the face of a deteriorating world.

BIOS:
Samuel Beckett (1906-1989) is widely recognized as one of the greatest dramatists of the twentieth century. He was awarded the Nobel Prize for Literature in 1969. Mr. Beckett is most renowned for his play Waiting for Godot, which launched his career in theater. He then went on to write numerous successful full-length plays, including Endgame in 1957, Krapp’s Last Tape in 1958, and Happy Days in 1960. Mr. Beckett received his first commission for radio from the BBC in 1956 for All That Fall. This was followed by a further five plays for radio including Embers, Words and Music, and Cascando. Like no other dramatist before him, Mr. Beckett’s works capture the pathos and ironies of modern life yet still maintain his faith in man’s capacity for compassion and survival no matter how absurd his environment may have become.

Andrei Belgrader is a theater and television director. He has also been a master teacher at the Yale School of Drama, a professor at UCSD, Head of the Directing Department at Juilliard and he currently teaches at USC School of Dramatic Arts. On television, he has directed numerous episodes of Monk as well as Law & Order: Criminal Intent and the sitcom Coach. He directed extensively at major regional theatres such as the American Repertory Theatre, Yale Repertory, the Goodman and Seattle Repertory, as well as in New York City. His recent projects in New York: Beckett’s Endgame at BAM, with John Turturro and Elaine Stritch, and The Cherry Orchard at CSC, with Dianne Wiest, John Turturro and Michael Urie and the 2013 production of Henrik Ibsen’s The Master Builder also with John Turturro. All three productions were named among the 10 best productions of the year in major publications such as The New York Times and New York magazine and The Cherry Orchard was awarded the Lucille Lortel Award for Best Revival in 2012.

Tony Shalhoub Five-time Tony-nominated play Act One at the Vivian Beaumont Theatre on Broadway. Film/TV credits include: Men in Black, Cars, Addams Family Values, Frasier, Too Big to Fail, and Wings. Theater credits include: The Odd Couple (Ahmanson Theatre), Conversations with my Father (Royale Theatre), The Scene (Second Stage Theatre), Golden Boy (Belasco Theatre), and Waiting for Godot(Classic Stage Company Theatre). He has been nominated for 3 Tonys for his work on Broadway and won 3 Emmys, 2 Screen Actors Guild awards, and a Golden Globe for the title role in the television series, Monk.