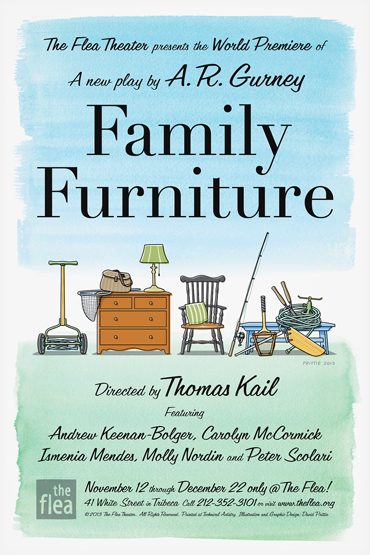 This holiday season don’t miss this “delicate family drama.” (Theater in the Now)

Family Furniture is a “tender, sepia-toned play about a traumatic passage in the lives of a tight-knit, well-bred clan [as a] sense of dangerous change seems to hang threateningly in the atmosphere, like a thunderstorm that just won’t burst.” (New York Times)

Kail’s direction is “smart, gentle and precise.” (Stage and Cinema)

As mother and father, “the radiant McCormick is perfectly cast as Claire” (New York Times) and “Scolari has never been better.” (Entertainment Weekly)

As daughter and son, Mendes “is natural and nuanced” (Woman Around Town) and Keenan-Bolger is “is one spark away from exploding.” (Theatermania)

“What Family Furniture offers is a throwback to another time.” (Theater in the Now)

A great destination between the holidays.
(New York Theater Now)

“The warmth it sends out may be just what you need in this cold winter.” (Maxamoo)

Family Furniture is a coming of age tale about a family and one certain summer when everything shifts. Gurney gives us Buffalo, gin and tonics, tennis doubles with the Baldwins, vichyssoise and so much more in this heartfelt tale about parents and children.

Jim Simpson, Artistic Director of The Flea says “In Family Furniture, Gurney returns to home territory, writing about the manners and morals of the white Anglo-Saxon Protestant upper class with the warmth, humor and insight that have spanned his career.”

A.R. Gurney has been writing plays for over fifty years. Among them are: The Grand Manner, Scenes from American Life, The Dining Room, The Middle Ages, The Cocktail Hour, Love Letters, Sylvia, Far East, Ancestral Voices, Big Bill Indian Blood, Crazy Mary, and Buffalo Gal. At The Flea he has premiered Heresy, Post Mortem, O Jerusalem, Screenplay, Mrs. Farnsworth, A Light Lunch and Office Hours. He has also written three novels, a few television scripts, several unproduced movies, and the librettos of two operas. Gurney is a member of the Theatre Hall of Fame and the American Academy of Arts and Letters. He has honorary degrees from Williams College and Buffalo State University, and taught literature at M.I.T. for many years.