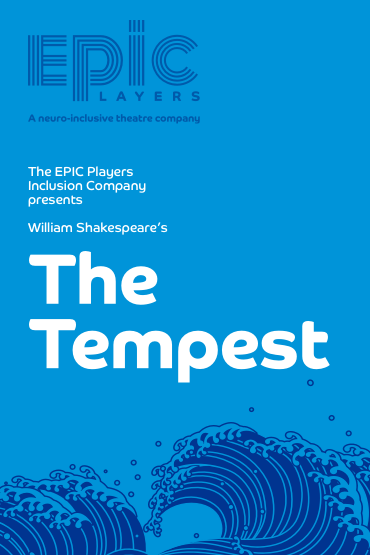 The third production of EPIC Players 2017-18 season is a neuro-inclusive adaptation of Shakespeare’s The Tempest.

*Does not include a $2 Theater Restoration Fee. Additional credit card fees may also apply.
VIP Tickets include a special gift.

Shakespeare’s last play, The Tempest explores themes of revenge, social hierarchy, inclusion and exclusion, telling the story of Prospero, the Duke of Milan usurped of his position and power by his brother and banished, along with his young daughter Miranda, to a magical island full of mysterious creatures. For 12 years, Prospero waits, uncover magical powers inside himself, until a sail appears on the horizon, with a ship carrying his past enemies. Creating a magical storm, he wrecks the vessel and washes those that have wronged him – and some who have saved him – upon the shore. When they wake they find themselves lost on a fantastical island where nothing is as it seems.

Click Here to view a Gallery of rehearsal photos for The Tempest!