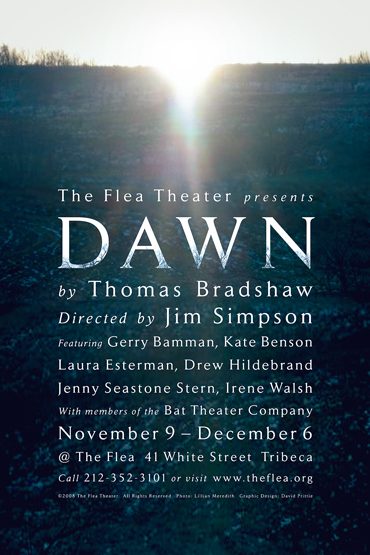 “[Bradshaw’s] most daring and mature work to date!” – New Yorker

“You will enjoy this latest visit to the unsettled world of Thomas Bradshaw, where people misbehave without the cushion of guilt or the filter of psychology. [Obie winner Gerry] Bamman is a perfectly unprepossessing lead for Bradshaw’s bitter, inexorable tragedy” – ****4 Stars! Critics’ Pick – Time Out New York

“Bradshaw’s best play! It will be a sad statement about the NYC theatergoing public if there is one empty seat in the house for the rest of this show’s run.” – www.nytheatre.com

DAWN revolves around Hampton, an abusive alcoholic who has completely alienated his wife and children. Can he stop drinking and make up for the past, even amidst some very dark revelations of incest and pedophilia? DAWN is one father’s story of redemption and reconciliation — with a twist.

Flea Artistic Director, Jim Simpson says, “Thomas Bradshaw is interested in presenting taboo subjects onstage, and DAWN is not an exception. Vice battles the oh-so American need for redemption in this family drama set in Florham Park, New Jersey. We are pleased to be presenting the work of this remarkable playwright whose work is so pleasantly unpleasant.”

According to the New York Times, playwright Thomas Bradshaws’s work is “likely to leave you speechless.” A professor of playwriting at Brooklyn College, Bradshaw has also been named one of the top 10 playwrights to watch by Time Out New York and Best Provocative Playwright in 2007 by The Village Voice. He is the author of Southern Promises which premiered at P. S. 122 in September. Other work includes Purity, Strom Thurmond Is Not A Racist and Cleansed, all published by Samuel French, Inc. He was a Fellow at New York Theater Workshop in 06-07’ and is now a Usual Suspect. Strom Thurmond Is Not A Racist was produced in Los Angeles in June 08’ and Dawn received a workshop with New York Theater Workshop at Dartmouth College in August. Dawn has been translated into German and was presented at Theater Bielefeld in Germany in October. He is currently working on an adaptation of The Book Of Job which has been commissioned by Soho Rep where he is a 2008-2009 Streslin Fellow.

DAWN runs November 9 – December 6, 16 performances only. Get your tickets today!