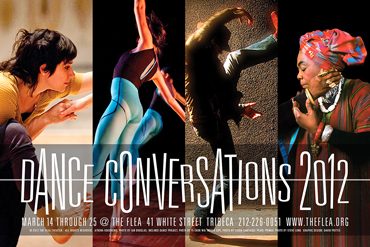 The Flea Theater is delighted to announce Dance Conversations 2012, a FREE festival continuing the spirited debate on dance and dancers.

Valerie Green
Valerie Green has been an active dancer, choreographer and teacher in the NYC dance community for over 16 years. She created her own company, Dance Entropy in 1998, adding a permanent company home in 2005 called Green Space in LIC Queens. Green Space serves the dance community by providing an affordable and welcoming environment for rehearsals, classes, and performances. To date Ms. Green has created 21 dances and 6 evening length works. Her choreography has been seen throughout NYC and has also toured to various venues throughout the US. Internationally she has taught and performed in Canada, France, Italy, Greece, Russia, India, Serbia, Bosnia, Croatia, and Albania. As a guest artist, Valerie has received commissions from Texas State University, BITEF Theater in Belgrade, Serbia, and Theater Alternativa in Tirana, Albania. She has also taught at the UNLV, Texas State, LaGuardia Community College, University of Nanterre, France, and at the Faculty of Drama & Art in Belgrade, Serbia and Sarajevo, Bosnia. www.DanceEntropy.org and www.GreenSpaceStudio.org

Wally Cardona
Wally Cardona has been recognized nationally and internationally for creating vast yet intimate works that use scale, setting and materials as integral partners in the creation of movement. Hailed as “one of the most adventurous choreographers of his generation, a master of passionate abstract dances” by Brooklyn Magazine, he is the recipient of a 2006 John Simon Guggenheim Memorial Foundation Fellowship in choreography and a 2006 New York Dance and Performance (“Bessie”) Award for the creation of Everywhere. He resides in Brooklyn, NY.

He is currently teaching Creative Process at The Juilliard School and Performance/Phenomenon: Theory and Philosophy into Physical Practice at The New School University in New York City.

Gina Gibney
Gina Gibney has created a repertory of dance works that have been presented and commissioned by prestigious venues in the US and abroad. Described as a “poet of modern dance” by the New York Times, Gibney is also dedicated to bringing the power of dance – both in performance and in practice – where it would not otherwise exist. Considered a pioneer in connecting the arts with the broader community, her company’s Community Action Programs have reached thousands of domestic violence survivors, individuals affected by HIV/AIDS and youth-at-risk. She is the founder of Gibney Dance Center, a seven-studio facility at 890 Broadway that serves the dance field with classes, space and unique programming. Gibney proudly serves on the Boards of Danspace Project and the Advisory Committee of Dance/NYC. She has received recognition and support from organizations such as the National Endowment for the Arts, the NYC Department of Cultural Affairs, LuEsther T. Mertz Charitable Trust, Mertz Gilmore Foundation, New York Community Trust and many others. Gibney graduated with high honors and received a Master of Fine Arts Degree from Case Western Reserve University. www.gibneydance.org

Carol Ostrow
Carol Ostrow joined Jim Simpson at the helm of The Flea in 2001 and The Guys marked her return to Off-Off-Broadway. She was the OBIE-award winning Producing Director of the Classic Stage Company, where she produced The Merchant of Venice, directed by Jim Simpson, the world premiere of Ezra Pound’s Elektra, directed by Carey Perloff as well as the acclaimed 30th anniversary production of Pinter’s The Birthday Party, among others.

For The Flea, Carol has produced dozens of world premieres and has been responsible for sound fiscal management of the theater’s $1M budget for nearly ten years. In addition to expanding and professionalizing infrastructure at The Flea, she helped to develop the theater’s current 14- member board of directors and has overseen the launch of a patron program that has raised more than $150,000 in the past two years. She has produced the theater’s successful galas and has helped The Flea win prestigious grants from The Andrew W. Mellon Theater Program, The Lower Manhattan Development Corporation, The Empire State Development Corporation and The Shubert Foundation, among many others.

Carol is a graduate of Vassar College and the Yale Drama School. She is a board member of LAVA, an acrobatic dance collective, serves on the President’s Advisory Council of Vassar College and the Board of Advisors of the Yale Drama School, and is one of the newest trustees to one of the oldest congregations in New York City, Central Synagogue. Married and the mother of four incredible young adults, she and her family count Pittsburgh, London, Montreal and now New York City once again as home.

Pele Bauch
Pele Bauch is a choreographer and dance dramaturg. Pele has been facilitating creative laboratories (Fieldwork) and residencies for more than seven years at The Field where she is Associate Director, Programming. She has provided dramaturgy to Ellis Wood, Carrie Ahern, Deborah Black and others. Pele has received choreographic residencies from The Joyce Theater Foundation, DTW, Chocolate Factory, and 92Y. Her work has been presented at the Brooklyn Museum of Art, the Chocolate Factory, Danspace Project, Movement Research, HERE’s American Living Room and the Best of, Dixon Place, and BAX. Pele has also received funding from the Lower Manhattan Cultural Council, Harkness Foundation for Dance, and Brooklyn Arts Council. Pele pronounces her name “pelly.” www.pelebauch.org

Bokaer’s choreography has been produced in Belgium, Canada, Cuba, Denmark, France, Germany, Greece, Holland, India, Spain, Switzerland, Thailand, the United Kingdom, and the United States. The development of his choreography in France has included major productions in Paris, Marseille, Lyon, and Avignon (FUSED, 2011), for which he was recently awarded the Prix Jeune Talent Chorégraphique by the SACD in Paris. Also in 2011, Bokaer received the Jerome Robbins special fellowship in Choreography of the Bogliasco Foundation, and was named one of “40 Under 40” by Crain’s NY Business. In 2008-2009 Bokaer became the first dance artist to be appointed a Young Leader of the French American Foundation. He led a group of choreographers in the formation of Chez Bushwick (2002). He later founded CPR – Center for Performance Research, a 4,000 square foot arts facility in Williamsburg, with John Jasperse (2008).

Bokaer is a current choreographer for the operas of Robert Wilson. Such works include “FAUST” (Poland), “AIDA” (Italy), “KOOL” (USA/Japan), and “FRONTERAS” (Spain).

About Dance Conversations @ The Flea

Click here for more info on Dance Conversations @ The Flea.