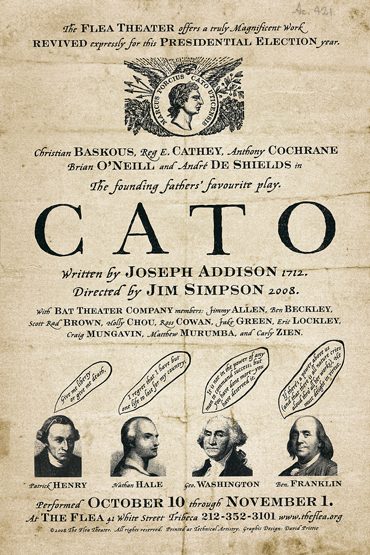 “This rich play receives a rare and powerful staging by Jim Simpson at the Flea Theater! This show belongs to André De Shields, a volatile and majestic performer who plays Cato.”– The New York Times

“The energy of the audience surged from attentive to completely hooked. We were laughing nervously, cringing, gasping… it was total magic!”
– NYTheater.com

“Sparkling political intrigue, which hasn’t lost a scintilla of luster over the centuries!”
– TheaterMania.com

Cato is based on the last days of Marcus Porcius Cato Uticensis (95-46 B.C.), a Roman Statesman who took sides with Pompey in an unsuccessful civil war against Julius Caesar. The play takes place in the city of Utica, where Cato (played by De Sheilds) and a small Roman Senate stand ready to defend the last vestige of the Roman Republic against Caesar. The play delves into such themes as individual liberty vs. government tyranny, Republicanism vs. Monarchism, logic vs. emotion and Cato’s personal struggle to cleave to his beliefs in the face of death.

When asked why a production of Cato now, Simpson responded, “This is the founding fathers favorite play, meaning men like Patrick Henry and Benjamin Franklin. Nathan Hale quoted from the play at the gallows. George Washington used speeches from it to inspire the troops and then commissioned a production for the men at Valley Forge. What better time than during an election year to produce a seminal piece of theater about virtue, war and the republic? Cato is a revelation.”

Joseph Addison (May 1, 1672 – June 17, 1719) was an English essayist and poet. He was a man of letters, eldest son of Lancelot Addison, and later the dean of Lichfield. His name is usually remembered alongside that of his long-standing friend, Richard Steele, with whom he founded The Spectator magazine. Cato is his most famous work.

Jim Simpson is the Founder and Artistic Director of The Flea Theater (2004 Drama Desk cited for Downtown Adventurous Theater). Two-time OBIE-award winner, 2002 National Board of Review Excellence in Filmmaking, and cited for artistic leadership in Downtown New York by the Lower Manhattan Cultural Council. Jim has directed over 70 works for the theater and has also directed for film and television. Venues include nine seasons at the Williamstown Theater Festival, Alley Theater, Hartford Stage, Yale Rep, Actor’s Theater of Louisville, Eisenhower Theater at the Kennedy Center, Lincoln Center, Playwrights Horizons, EST, CSC, MCC, the London International Theater Festival and the Melbourne Fringe Festival. Jim was a child actor in his hometown of Honolulu, as a teenager worked with Jerzy Grotowski in Poland, and holds degrees from Keio University in Tokyo, Boston University School for the Arts, and the Yale Drama School. Most recently, Jim directed A. R. Gurney’s Crazy Maryat Playwrights Horizons and Will Eno’s Oh, The Humanity and the revival of Peter Handke’s Offending The Audience at The Flea.

About The Flea Theater

The Flea Theater, under Artistic Director Jim Simpson and Producing Director Carol Ostrow, is one of New York’s leading off-off-Broadway companies. Winner of a Special Drama Desk Award for outstanding achievement, Obie Awards and an Otto for political theater, The Flea has presented over 80 plays and numerous dance and live music performances since its inception in 1996. Past productions include Anne Nelson’s The Guys, A.R. Gurney’s O Jerusalem, Screenplay, Mrs. Farnsworth and Post Mortem, Roger Rosenblatt’s Ashley Montana Goes Ashore…, Kate Robin’s The Light Outside, Elizabeth Swados’ JABU, Talking Band’s The Parrot, Karen Finley’s Return of the Chocolate Smeared Woman, Glyn O’Malley’s A Heartbeat to Baghdad, Yussef El Guindi’s Back of the Throat, Julian Sheppard’s Los Angeles, Adam Rapp’s Bingo with the Indians and most recently, Will Eno’s Oh, The Humanity and other exclamations.