but i cd only whisper 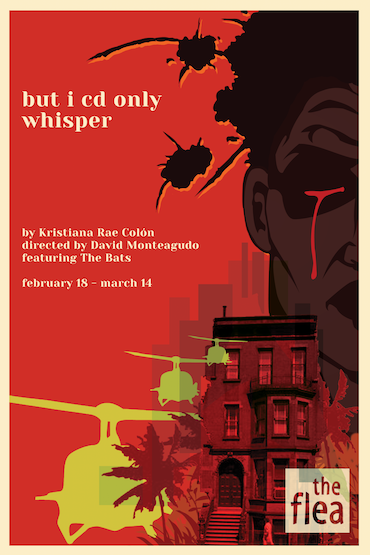 “a theatrical event not to be missed!
…a refreshingly intelligent play, with brave performances and a keen design, that is truly a standout in this year’s off off Broadway season.“
-Rachel Abrams, Theatre is Easy (Best Bet)

At the tail end of the Vietnam War veteran Beau Willie Brown attempts to return to the family and life he left behind. Inspired by and including extracts from For Colored Girls Who Have Considered Suicide When The Rainbow Is Enufby Ntozake Shange, but i cd only whisper explores the effects of trauma, moving through time and space, fusing the physical and the poetic.

“but i cd only whisper is a beautifully sophisticated play, which combines monologues, fantasies and flashbacks to tell the story of black Vietnam vet Beau Willie Brown…As Beau opens up, a murky picture emerges of a man at battle with himself and society.” – Time Out London Review

Kristiana Rae Colón (playwright) is a poet, playwright, actor, educator, Cave Canem Fellow, and Executive Director of the #LetUsBreathe Collective. Her play Octagon, winner of Arizona Theater Company’s 2014 National Latino Playwriting Award and Polarity Ensemble Theater’s Dionysos Festival of New Work, had its world premiere at the Arcola Theater in London in September 2015. Her work was featured in Victory Gardens’ 2014 Ignition Festival. In 2013, she toured the UK with her collection of poems promised instruments published by Northwestern University Press. In autumn 2012, she opened her one-woman show Cry Wolf at Teatro Luna in Chicago while her play but i cd only whisper had its world premiere at the Arcola Theater in London. Kristiana is a member of the Goodman Playwrights Unit, a Resident Playwright at Chicago Dramatists and one half of the brother/sister hip-hop duo April Fools. She appeared on Season 5 of HBO’s Def Poetry Jam.

David Monteagudo (director) is a Brooklyn-based director and producer. He has developed and produced work with The Flea, The Atlantic, Theater for the New City, and Ma-Yi Theaters amongst others. His project Under the Hood, which melds game theory and theatrical conventions, was featured in the 2014 Come out and Play Festival and will be presented as part of The Best Games Festival in Pittsburgh. He is a founding member of State of Play.