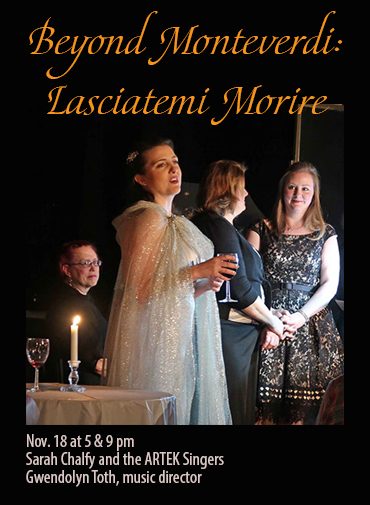 ARTEK performs its madcap theatrical take on Monteverdi’s famous lament “Lasciatemi morire” from the lost 1607 opera Arianna, with ARTEK’s fabulous singers and the magnificent Queen Ariadne herself, classical/cabaret singer Sarah Chalfy. Who knew Ariadne didn’t die on that beach where she sang “Let me die,” but instead hooked up with Bacchus? A total hit when it premiered in spring 2017, don’t miss this chance to hear beautiful madrigals, haunting solos, and the enchanting story of Ariadne.

The show will be performed as a one-act baroque cabaret set, without intermission, approximately 75 minutes. Complimentary wine will be served.