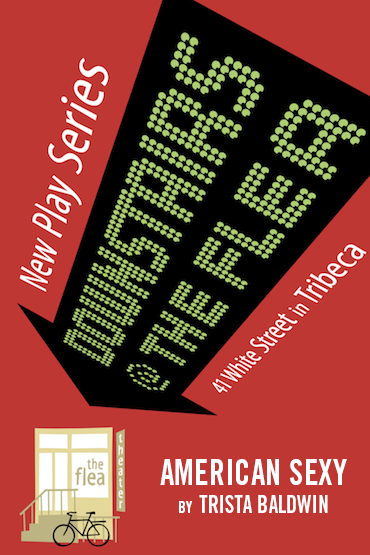 “Strong & convincing—and brought to life with total commitment by four talented young actors, under the direction of Mia Walker” – The New Yorker

“An in-your-face production, sure to leave an impact” – Examiner.com

The Flea Theater is proud to support the directorial debut of Resident Director Mia Walkerwith the New York Premiere of American Sexy by Trista Baldwin, featuring members of The Bats. Previews begin January 15, with opening night slated for Saturday, January 29.

A searing exploration of sexuality in the digital age, American Sexy follows four college students en route to a carefree fling in Sin City, when an unexpected stop at the Grand Canyon reveals depths that none of them are prepared for. On the edge of one of America’s most magnificent vistas, relationships rattle and bonds break, creating rifts as wide and relentless as the canyon itself.

“American Sexy is one of the most haunting premieres to come down the pike in a long time,” says Simpson. “As always, The Flea is excited to introduce to New York audiences gripping new works and performances via the ever electrifying Bats.”

Trista Baldwin’s plays include SAND(Women’s Project), FORGETTING (PlayLabs, Workhaus Collective), CHICKS WITH DICKS and the award winning PATTY RED PANTS. A recipient of two Jerome Fellowships and a McKnight Advancement Grant, Trista Baldwin’s work has been developed and produced by companies including The Guthrie, Women’s Project, The Lark, New Georges, Bay Area Playwrights’ Foundation, Bricolage, Perishable Theater, Hypothetical Theatre Company, La Mama, HERE, Urban Stages, Synchronicity, Live Girls!, Eternal Spiral Project, The Red Eye, Bloomington Playwrights’ Project, Circle X, The Empty Space Theatre and National New Play Network. Currently in development is MESUJIKA DOE a bi-lingual, cross cultural piece created collaboratively with Tokyo theatre artist Shirotama Hitsujiya of Yubiwa Hotel. Workshops of MESUJIKA DOE have been presented by Saison’s Morishta studios in Tokyo, Japan and The Playwrights’ Center of Minneapolis. Work culminates in premieres in San Francisco and Tokyo beginning May 2012. Other upcoming international productions include the Chilean premiere of the original DOE in the 2011 Santiago a Mil festival. A native of the woods of Washington State, and sometime-New Yorker, she currently makes her home in Minneapolis, where she teaches playwriting and screenwriting at SCSU, is a co-founder of the Workhaus Collective, a Core Alum of The Playwrights’ Center, and mother of Ila. Her work is published by Heinemann and Playscripts.