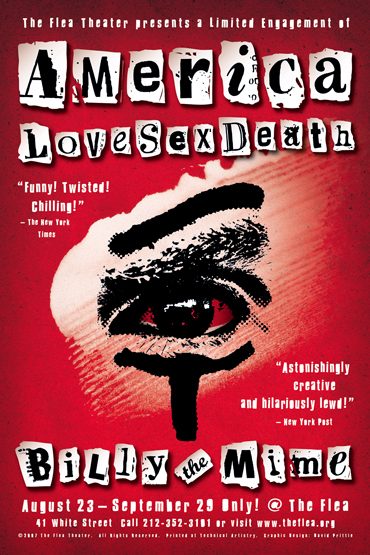 Billy The Mime garnered international attention with his show-stopping appearance in the hit documentary The Aristocrats. Billy has rejuvenated an art form that has been justly ridiculed due to untrained and amateur practitioners, and he has restored its ability to entertain, amuse, shock, and move an audience. America LoveSexDeath will tackle controversial subject matter with such routines as JFK JR. We Hardly Knew Ye, Close To Her: Karen Carpenter, Slave!, World War II, Thomas & Sally: A Night at Monticello, The Priest and The Altar Boy, The Abortion, Terry Schiavo, Adieu, A Night in San Francisco – 1979, A Day Called 9/11, Kurt Cobain: Why?, Christopher Reeve: A Super Man, Love & Death: OJ and Nicole, A Night with Jeffrey Dahmer and Virginia Tech 4/16/07.

His appearance in the New York Fringe Festival 2006 played to sold-out houses and garnered rave reviews, such as: “Funny! Twisted! Chilling!” by The New York Times and “Astonishingly creative and hilariously lewd!” by The New York Post. He returned to New York for a Fringe Encore “Best of the Festival¨ at The Lion Theater at Theater Row. Billy presented five sold-out shows at the Montreal Just For Laughs Comedy Festival in 2006 and recently appeared at The Upright Citizens Brigade Theater in Los Angeles and New York. Billy’s television appearances include The Jimmy Kimmel Show on ABC and Penn & Teller’s Bulls**t! on Showtime.

America LoveSexDeath performs at the Flea from August 23 —September 29.