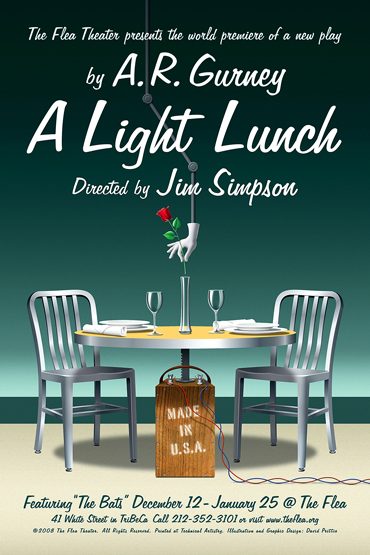 “The gentlemanly playwright A. R. Gurney casually tosses his own metaphorical shoe… in the direction of our departing president in his latest politically minded play, A Light Lunch. Mr. Gurney take[s] jovial, self-deprecating jabs at his own foibles, and the follies of the theater business too.” – Charles Isherwood, New York Times

“A.R. Gurney’s jokey new play, A Light Lunch, is refreshingly unlike most contempo American political theater. Plenty of laughs, and no shortage of fun moments between the performers. It’s a “Lunch” worth chewing over!” – Variety

“A Light Lunch is a model of political theater. The beauty of it is that its politics and its theater could not be more inextricably bound. The play is fluidly directed by Jim Simpson, and the cast play their roles adroitly.” – Theatermania.com

“I laughed a lot! The performances by the Bats, the Flea’s young resident company, are all well thought out and fresh. The Bats are most definitely a talented group of young artists.” – NYtheatre.com

The Flea Theater will present the World Premiere of A LIGHT LUNCH by A.R. Gurney, beginning previews December 12. The production, directed by Flea Artistic Director Jim Simpson, marks the fifth collaboration between Gurney and The Flea. A LIGHT LUNCH was written expressly for The Bats, The Flea’s resident company of emerging actors.

A LIGHT LUNCH is a post-Bush cautionary tale about the price paid for legacy. When a young lawyer from Texas invites a literary agent for lunch in a New York City restaurant, more than a production is on the table.

Says Simpson, “This charming topical comedy about the O generation couldn’t come at a better time. I am delighted to work again with a playwright as adept as Gurney and who cares so passionately about the state of current affairs. He is also a great fan of The Bats and wrote this piece specifically for the young actors in the company.”

A.R. (“Pete”) Gurney has been writing plays for over fifty years. Among them are: Scenes from American Life, The Dining Room, The Middle Ages, The Cocktail Hour, Love Letters, Sylvia, Far East, Ancestral Voices, Big Bill, Mrs. Farnsworth, Indian Blood, Crazy Mary, and Buffalo Gal. He has also written three novels, a few television scripts, several unproduced movies, and the librettos of two operas. Gurney is a member of the Theatre Hall of Fame and the American Academy of Arts and Letters. He has honorary degrees from Williams College and Buffalo State University, and taught literature at M.I.T. for many years.

Jim Simpson is the Founder and Artistic Director of The Flea Theater (2004 Drama Desk cited for Downtown Adventurous Theater). Two-time Obie Award winner, 2002 National Board of Review Excellence in Filmmaking, and cited for artistic leadership in Downtown New York by the Lower Manhattan Cultural Council. Jim has directed over 70 works for the theater and has also directed for film and television. Venues include nine seasons at the Williamstown Theater Festival, Alley Theater, Hartford Stage, Yale Rep, Actor’s Theater of Louisville, Eisenhower Theater at the Kennedy Center, Lincoln Center, Playwrights Horizons, EST, CSC, MCC, the London International Theater Festival and the Melbourne Fringe Festival. Most recently, Jim directed A. R. Gurney’s Crazy Mary at Playwrights Horizons; Will Eno’s Oh, The Humanity…; revivals of Peter Handke’s Offending The Audience and Joseph Addison’s Cato; and Dawn by Thomas Bradshaw at The Flea.