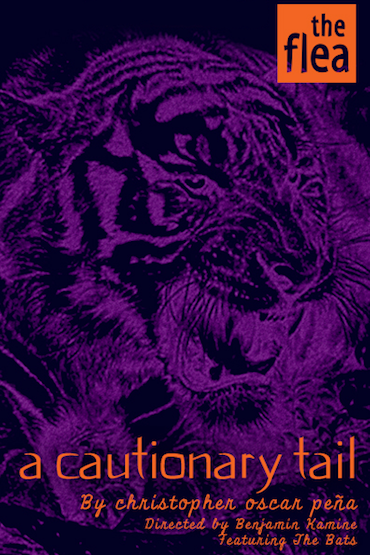 “BOTTOM LINE: This unusual play remains consistently enthralling in its exploration of the penalties of our dependence on technology and the clash of Chinese and American cultures.”
-Theater is Easy

“a cautionary tail is a highly imaginative, yet intimately poignant story about youth, about finding one’s direction, about the grip that the people who raise us might have on our entire forward path in life.”
-New York Theatre Review

“>More physical and emotional heft than almost anything you might see on Broadway.
-CT News

“I am an American”: issues of racial representation in American Theater
May 30th following the 7pm performance

“We live in the future”: ethnicity in New American Playwriting
June 9th following the 7pm performance

A play of impossible choices – set in a world of magical characters.

“a cautionary tail is a wild ride of old ways colliding into new ones with all the hyperactive delirium we’ve come to love from The Bats. It’s one of those downtown adventures that reassures you playwriting still has plenty of new things to try out, and we can all have fun along the way.” -A. Rey Pamatmat, Playwright

“christopher oscar peña’s a cautionary tail is a criminally fun mix of fun and fearless storytelling. Add to that a terrific cast, and Benjamin Kamine’s smart, inventive staging, and you get the kind of theater you want to take home with you.” -Ralph Peña, Artistic Director of Ma-Yi Theater

First generation Chinese-Americans growing up in New York City, siblings Vivienne and Luke confront their confused tangle of family, their diverse array of friends, and their rampant sexuality. In our digital age, how can they navigate the traditional expectations of their mother with their American culture of individuality?

“In a time when very few Latino playwrights seem to grace the stages of New York Theater, identity politics are often severely over-simplified. After a year of shocking and offensive yellow-facing on some of the worlds most prominent stages, I couldn’t be more thrilled to be having the world premiere of a cautionary tail happen at The Flea with diverse cast of actors who represent not only New York, but what America looks like to me,” says christopher oscar peña.

christopher oscar peña (Playwright) is a playwright from California currently splitting his time between New York City and Chicago. He received his B.A. in Dramatic Arts from U.C. Santa Barbara where he studied with Naomi Iizuka and holds an M.F.A. in Dramatic Writing from NYU’s Tisch School of the Arts. His plays include maelstrom, l(y)re, i wonder if it’s possible to have a love affair that lasts forever? or things i found on craigs list, icarus burns, the suicide tapes, alone above a raging sea, and TINY PEOPLE (or, it gets better). His work has been developed or seen at The Public Theater, Two River Theater, New York Stage and Film with The Lark, Ars Nova, NYUGrad, INTAR, Rattlestick Playwrights Theater, The Flea Theater, The Ontological Hysteric Incubator, art.party, American Theater Company (Chicago), Son of Semele (LA) and The New York Theatre Workshop, among many others. With Vayu O’Donnell, he is the creator and co-star of 80/20, a new series for the web, which was named an Official Selection at the 2013 New Media Film Festival in LA. An alumni of INTAR’s Hispanic Playwrights Lab, he has also been an Emerging Artist Fellow at NYTW, a Writing Fellow with The Playwrights Realm, and was a recipient of the Latino Playwrights Award from the Kennedy Center in Washington, D.C. He has been a visiting fellow at the O’Neill Playwrights Conference, the Sewanee Writers Conference in Tennessee, featured in the Crossing Borders Festival with Two River Theater and has also been in residence at the Orchard Project. In 2011, christopher traveled to London as part of the T.S. Eliot US/UK Exchange with the Old Vic New Voices where his play however long the night premiered on the Old Vic stage. He was the Lark Play Development Centers 2012 Van Lier Fellow, and is currently working on a commission for the Goodman Theatre where he is in residence as a member of their Playwrights Unit. He is represented by Kate Navin at Gersh and Henry Huang at Station 3.

Benjamin H. Kamine (Director) is a stage director and designer based in Manhattan. He recently directed the world premiere of Thomas Bradshaw’s Job at The Flea Theater (Timeout Critics’ Pick, “a jolting treat” – Ben Brantley, New York Times). Other directing credits include Medea’s Got Some Issuesby Emilio Williams (Best International Show 2012, United Solo Festival at TheaterRow), Why Me? by Leah Nanako Winkler (Asking for Trouble at EST), The Man Under by Paul Bomba (59E59), and an immersive audio theater piece with Tommy Smith called Nectarine EP. He is a resident director at The Flea Theater and at the Jewish Plays Project and is a member of the Lincoln Center Theater Directors Lab. He has developed work with The New Group, The Flea Theater, EST/Youngblood, Barefoot Theatre Company, Primary Stages, and the Jewish Plays Project, directing readings and workshops of plays by Bekah Brunstetter, Robert Askins, Nick Jones, and Trish Harnetiaux, among others. He also works throughout New York as a sound, lighting, and projection designer, and is a Guest Artist at the Lab School for Collaborative Studies.