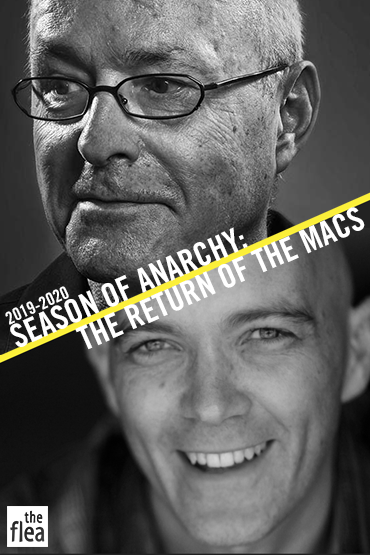 Tickets start at $37*
Now on-sale to the public!

The Flea Theater is proud to announce the 2019-2020 Season of Anarchy: Return of the Macs. The season features a festival of plays dedicated to three-time Obie Award winning playwright and poet, Mac Wellman, and the premiere of Tony Award nominee, Taylor Mac’s The Fre, along with the return of The Flea’s family programming CEREALS and the late-night episodic series SERIALS.

There is a limited number of $15 tickets available for every show on a first-come, first-served basis.

A Festival of Plays

Three-time Obie Award winning playwright and poet and one of The Flea’s original co-founders, Mac Wellman has always stood at the vanguard of dramatic truth. His plays challenge our most deeply rooted political and social issues. Wellman makes (non)sense of white supremacy, the leaders of our nation and our institutions of higher learning, all the while daring to push theater past good intentions. This fall, The Flea honors Mac Wellman. His plays have inspired a generation of writers and his voice must be lifted and heard. The festival will feature the plays Sincerity Forever, Bad Penny, The Invention of Tragedy, The Sandalwood Box, and The Fez.

The Flea’s spring 2020 centerpiece will be the World Premiere production of The Fre by Tony Award® nominee and Bat Theater Company alum, Taylor Mac, and directed by The Flea’s Artistic Director and frequent Taylor Mac collaborator, Niegel Smith. The Fre tells the story of an intellectual aesthete who is trapped inside a mud put in the middle of a swamp by the swamp’s fatuous inhabitants who call themselves the “Fre.” Using a combination of potty-mouthed prose versus heightened verse and loosely based on The Frogs by Aristophanes, The Fre will take audiences literally and figuratively into a mud pit to hash out the current political divide. It is a play for all ages; children and their families are encouraged to come.

by Sara Farrington
Conceived and directed by Marina McClure
Featuring The Bats
DATES COMING SOON!
in The Pete

Sara Farrington’s commission of Cosmicomics is a children’s theater piece based on the short stories Italo Calvino. In Cosmicomics, the play’s non-gendered protagonist, Qfwfq, a young dinosaur who miraculously survived the ice age, makes their way in a magical brave new world, searching for their mother and pondering how to not only evolve but thrive in a world without anyone else who looks the same.

by SERIALS Writers Rooms
Featuring The Bats
in The Siggy

“In both Mac Wellman and Taylor Mac we have poet playwrights with an absurdist’s sense of the world around us and a showman’s love of the power of theater. They are (sur)realists and dreamers and they choose the stage to let us know that while we might be close to the edge – all is not lost!”

“It is high time that we honor Flea Founder Mac Wellman. His plays have influenced a generation of writers and his voice needs to be heard. As for Taylor Mac, aren’t we all waiting with baited breath to see what he does next? Well The Flea knows!”