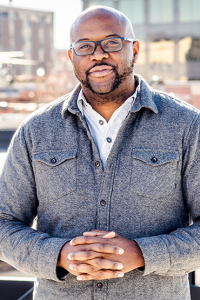 Idris Goodwin is an award-winning playwright, director, orator, and educator. He is the Producing Artistic Director of Stage One Family Theater in Louisville, KY for which he penned the produced And In This Corner: Cassius Clay. His play, HYPE MAN: a break beat play is making its New York City premiere and is the third production in our 2018/19 COLOR BRAVE Season. The play follows a front man, hype man, and beat maker are on the verge of hitting it big when yet another police shooting shakes them to the core. We caught up with Idris to talk hip-hop theater and his goals for the New York premiere of HYPE MAN.

Thank you, Idris, for hanging out with me today and for writing this play that fits into our COLOR BRAVE season. HYPE MAN still in previews, is already impacting its audience members. When you wrote the play what were some of your inspirations?

There were a few sparks. The title HYPE MAN had been floating around my head for a while as a potential entry in my break beat play series. These plays explore hip-hop’s impact on America. The dynamic of a rapper and a hype man was fertile for performance possibility and dramatic conflict. And hype men and women are necessary but stay the unsung heroes of hip-hop. Another spark was from rapper David Banner in his 2014 BET performance: “Where were the white rappers when they mowed Mike Brown down?”

Issues of race cannot only be an issue for victims of racism. The final spark was from my very own life, navigating issues of race with white colleagues and friends.

There‘s a line in your play “If they knew us, they wouldn’t kill us.” It gets me every time as the actor shouts these words. The bond of your three characters, Pinnacle, Verb, and Peep One is clear. They are close, and their bond adds to tension because they care so much. Their shared love of hip-hop has put them the same room. Why hip-hop?

The lyrics in a lot of hip-hop music talk about family bonds. For these characters this is their family and through hip-hop they are exercising the liberties of the first amendment without an apology, but with loyalty. Hip-hop allows these characters to communicate with a rebellious spirit that is found in hip-hop music.

One might say your play is asking “What happens when white people enter this space?” The space referring to the hip-hop industry.

Yes, for sure! A white rapper is less of an anomaly than in previous times but what is rare is the number of white artists working in the world of hip-hop who speak up on behalf of issues that matter to Black people and whose innovations they are enjoying.

Sitting in the rehearsal room with The Bats, are there any new discoveries?

With any production, I‘ve had the pleasure of having multiple productions, it occurs to me that no matter age, race, or shape theatergoers enjoy meeting characters that are honest and accessible. The theater offers a window into the world of others. The Flea‘s putting the production “in-the-round” makes it impossible to not be in-the-room, and this creates something new each night. I‘m excited about New York audiences to experience this moment in these characters’ lives.