Thomas Bradshaw’s plays include Intimacy (New Group, 2014), JOB (The Flea, 2012), Mary (Goodman Theater, 2011), Burning (New Group, 2011), The Bereaved (Crowded Fire, 2013, Partial Comfort, 2009, The State Theater of Bielefeld in Germany), Southern Promises (PS122, 2008), Dawn (The Flea, 2008), and many more. Mr. Bradshaw received his M.F.A. from Mac Wellman’s playwriting program and is an Assistant Professor at Northwestern University. He has been featured as one of Time Out New York’s ten playwrights to watch and the Best Provocative Playwright by the Village Voice. He has received Fellowships from The Lark Play Development Center, Soho Rep. (Streslin Fellow), and New York Theater Workshop. He was the Playwright in Residence at The Soho Theatre in London in February 2009. His plays are published by TCG, Samuel French, and Dramatic Publishing. He is the recipient of a 2009 Guggenheim Fellowship, and the 2012 Award from the Foundation for Contemporary Arts. 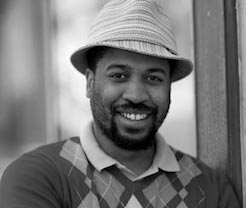