Ryan Wesley Stinnett is a New York based actor, comedian, and writer. He was a member of The Bats from 2012-2019. At The Flea he has worked with Jim Simpson, Niegel Smith, Elizabeth Swados, Erin Courtney, and countless others. Performances at The Flea include: The Nomad, Take Care, The System, and LOCKED UP BITCHES. Ryan recently made his Commercial Off-Broadway debut as Narrator in the long-running hit play Puffs at New World Stages. He is the co-writer/creator of LIZ & RYAN: NEED HELP? which finished it’s first full season at The People’s Improv Theater in summer 2019. Other full-length comedies include The Ryan Wesley Stinnett Show: The Greatest Television Show Not On Television and Courtney, Ryan & The Great Ham Factory Fire Of 2012 (co-written/performed with Flea Artistic Associate Courtney Ulrich). He holds a BA in Theatre as well as a BSBA in Marketing from the University of North Carolina at Charlotte. He also has an MFA in Acting from the University of Virginia, which he holds with his third hand. @ryanstinnett 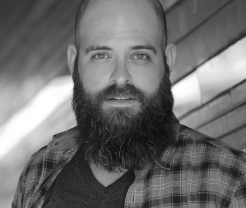