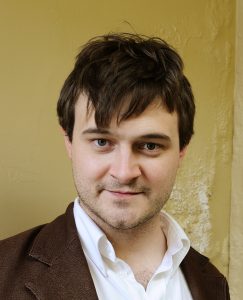 Before settling in New York almost a decade ago, Kristan was a freelance director in Oregon. While on the other coast, he worked for eight seasons at Portland Center Stage, first as a Literary Associate and later as Corporate Development Associate during the organization’s transition into the historic Armory Theater, a world-renowned Green Building project. Kristan came up in the theater working on new plays, serving as dramaturg on a score of premiere productions and developmental workshops. He is passionate about new writing including the recent premiers of Mary-Kate Olsen is in Love by Mallery Avidon and The Electric Lighthouse by Ed Himes (both at The Flea). Other new plays Kristan has directed include Mutt by Lava Alapai (Many Hats Collective) and The Verspiary by Matthew Zrebski (Stark Raving Theatre) as well as NW regional premieres of Carlos Murillo’s Mimesophobia (Sand & Glass Productions), The Long Christmas Ride Home by Paula Vogel (TheatreVertigo) and Mac Wellman’s A Murder of Crows (defunkt theatre). Kristan also assisted on the recent Flea premieres of NSangou Njikam’s Syncing Ink and A. R. Gurney’s Ajax.

Kristan is a graduate of the Brown/Trinity Rep MFA program in directing and while in Providence he helmed workshop productions Oh Guru Guru Guru by Mallery Avidon and The Darkson Chronicles by Theo Goodell. Recent favorite revivals include Brecht & Weill’s The Threepenny Opera, John Webster’s The Duchess of Malfi (Brown/Trinity Rep) and Hamlet (CoHo Productions). Kristan’s staging of Gertrude Stein’s Doctor Faustus Lights the Lights (defunkt theatre) garnered him a Portland Dramatic Critics Circle award (Drammy) for Outstanding Direction. Some of his favorite assisting credits include A Raisin in the Sun, A Christmas Carol and Camelot (Trinity Rep). In New York, Kristan has developed new plays at Playwrights Horizons/Clubbed Thumb (Superlab), the Lark, Target Margin and The Flea.  He is also a proud alumni of the 2012/13 Soho Rep Writer/Director Lab and an Associate Artist at Tribeca’s own Flea Theater.