In their third year at Brown University, Maurice Decaul and Eli Nixon will tackle the third phase of their annual practicum. First year writers focus on vision to notation while second years embrace notation and integrate additional elements of performance. Equipped with the experience of the previous years, third years explore the way their text engages with community and audience with a thesis production. As a culmination of their three years in the program, the writers are asked to take their biggest textual risks, pressing at and beyond the most hopeful limit of what they know and believe their words can do.

Brown University’s Department of Theatre Arts and Performance Studies has developed a fully reciprocal relationship with The Flea Theater in New York. The partnership, now in its second year, allows the graduate student writers to share a dynamic, creative, experimental, and professional space with a theater at the vanguard of writing for performance. The Flea Theater makes available its space as well as resident actors and directors, giving the Brown students a unique opportunity to engage collaboratively with emerging voices in the world of theater, performance, and activism. The purpose of the residency is to shape creative environments in which writers generate work with the aim of igniting life-long artistic relationships.

Eli Nixon ’18 MFA builds portals and gives guided tours to places that don’t yet exist. They are a genderqueer clown, a cardboard constructionist, and a maker of plays, puppets, parades, pageants, suitcase theaters, and low-tech spectaculah- on their own, and in collaboration with artists, dancers, and musicians of all ages, abilities and persuasions. Their performances and installations occur in galleries and garages, on street corners and stages. Eli’s current creative efforts include identifying opportunities to dismantle Manifest Destiny and white supremacy, foster intra and interspecies kinship, probe the ethics, perils and possibilities of anthropomorphization, and co-parent an 8 year old human. Eli’s endeavors have been supported by the RI State Council on the Arts, SPACE on Ryder Farm, The Leeway Foundation, the Manitoulin Conservatory for Creation and Performance and many others. Eli worked for and with Pig Iron Theater, Spiral Q, and Bread and Puppet. For over 20 years, Eli has been an artist-in-residence at museums, schools, senior centers, and addiction recovery and mental health programs. They are in their 3rd year of Brown’s Writing for Performance MFA program.

Share a marshmallow with an Iron-age bog body. Fondle a fossil. Feel the wind of the wings of a flamboyant flock of flag-dancing shore birds in the midst of their migration. Blood Bag by Eli Nixon is a new play about a queer skeleton’s efforts to decolonize their marrow and learn to hear the moon. It is a clown-eyed probe into modern human life and our current biomedical industry’s dependence on horseshoe crab blood. This athletic exploration of inter-species kinship, adaptation, and extinction asks what we can learn about fortitude and interdependence from our primordial ancestors. 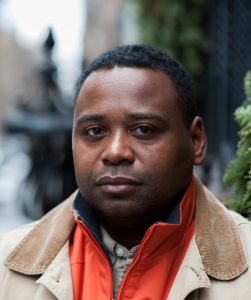 Maurice Emerson DeCaul ’18 MFA, a former Marine, is a poet, essayist, and playwright, whose writing has been featured in the New York Times, The Daily Beast, Sierra Magazine, Epiphany, Callaloo, Narrative, The Common and others. His poems have been translated into French and Arabic and his theatre pieces have been produced at New York City’s Harlem Stage, Poetic License Festival in New York City, Washington DC’s Atlas INTERSECTIONS FESTIVAL in 2013 and 2014, l’Odéon-Théâtre de l’Europe in Paris, The Paris Banlieues Bleues Festival, The Middelhein Jazz Festival in Antwerp, The Avignon Theatre Festival in France and Détours de Babel, the Grenoble Festival, Grenoble France. Forthcoming productions include Arizona State University Gammage Memorial Auditorium, The Metropolitan Museum of Art in New York City, The David Rubenstein Atrium at Lincoln Center, The Mary L Welch Theatre at Lycoming College in Williamsport Pennsylvania and The Kimmel Center in Philadelphia, Pennsylvania. Maurice is TCG’s first artist in residence and is charge of TCG’s Veterans & Theatre Institute. Maurice is a graduate of Columbia University [BA], New York University [MFA] and is currently working towards his MFA in playwriting at Brown University.

In an America ruled by a military commission, where the bill of rights has been suspended and sedition is viciously punished, Joanna resists the commission’s book ban, risking everything to publish and distribute the “great” books. But when Val, an unknown author arrives with a particularly critical book and asks Joanna to publish it, can she take the risk of trusting Val, in a country where people routinely disappear for doing much less?

Brown University’s Graduate Writing for Performance Program culminates in an MFA Playwriting degree. The program is a central site in New England for the formation of new playwrights. The program grants its students broad inventive license while offering close mentorship and profound resources in the department, the university, and the greater local and international communities. Alumni of the program include Pulitzer Prize winner, Quiara Alegría Hudes ’04 MFA (In the Heights, Water by the Spoonful); MacArthur Genius Grantee, Nilo Cruz ’94 MFA (Anna in the Tropics); and Pulitzer Prize nominee, Sarah Ruhl ’01 MFA (The Clean House, In the Next Room). The Writing is Live festival (formerly the New Plays Festival) is made possible through support from an endowed fund for the Adele Kellenberg Seaver ’49 Professorship in Literary Arts.