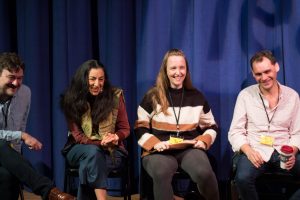 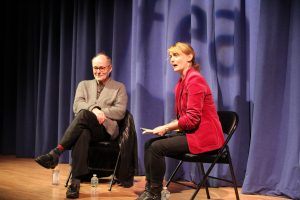 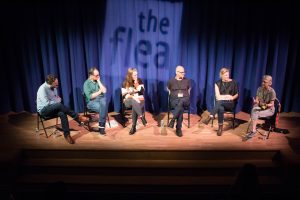 The Flea Theater hosted a Mac Wellman Symposium: THE ART OF STACKING THE DECK October 4-6, 2019. The three-day symposium was a rare opportunity for Wellman enthusiasts to gather to share stories and dig deep into the mysteries of Wellman’s writing.

Anne Washburn, Young Jean Lee, and David Lang were among over twenty artists from the fields of theater, dance, opera, and new media who gathered to celebrate mischievous master writer Mac Wellman.

Playwright Kate Benson said his writing, “exists to overwhelm you and provoke you into different states of being”, adding that acting in his plays, “is like trying to surf on a dolphin”.

Wellman is an OBIE-winning playwright whose body of work includes more than forty plays, texts for dance, an opera, a novel, and seminal essays on the state of theater. This fall, The Flea is producing five of Wellman’s plays as part of PERFECT CATASTROPHES, a festival of iconic works and two world premieres.

The Symposium featured four panels on Wellman’s writing and teaching, and a rare interview with Mac Wellman conducted by Helen Shaw. Guests were treated to a revival of Terminal Hip, showcasing the iconic OBIE-winning performance by Steve Mellor, one of the foremost living interpreters of Wellman’s work in addition to the opportunity to see, Bad Penny, Sincerity Forever, The Invention of Tragedy, The Sandalwood Box and The Fez, all five productions playing in repertory at The Flea.

The first day of the Symposium featured panels on approaching Wellman’s dense and free-flowing text. Lively discussions traced the agony and ecstasy of working with a writer who challenges his collaborators to tackle the impossible. Directors Meghan Finn, Paul Lazar, and Elena Aroaz compared strategies for making each moment in a Wellman play legible. Producer Annie Hamburger and performer Jan Leslie Harding shared memories from the original production of Bad Penny in Central Park. Composer David Lang explained how Wellman changed his writing style to fit the demands of opera. And Maria Striar, Artistic Director of Clubbed Thumb, remembered a poignant moment of Wellman’s generosity as a collaborator and friend.

Other panels featured writers who had studied with Wellman. Young Jean Lee credited Wellman with making her a playwright with a mission to constantly subvert and suggested that Wellman’s teaching has seeded the next generation of theatrical revolutionaries. Sibyl Kempson shared that Wellman’s biggest gift to her was to take her own playwriting seriously. Eliza Bent and Kristine Haruna Lee recounted cherished Wellman assignments that they include in their own teaching practice. Karinne Keithley Syers traced her path from being a choreographer to a writer, lead by Wellman’s unique approach to dimensionality and physicality. Alongside Wellman, Erin Courtney was celebrated for her invaluable contributions to the MFA Playwriting program at Brooklyn College.

Anne Washburn began the Symposium by expounding on the specific techniques and rigor required to succeed in a Wellman play. Audiences saw that rigor in action when Steve Mellor took the stage for two nights in Terminal Hip, Wellman calls it, “A spectral history of America through the medium of Bad Language”. In a virtuosic performance that hadn’t been seen in New York in nearly twenty years, Mellor uproariously made his way through an hour of found language, overhead conversation, and stand-up comedy.

As fits a writer whose work resists being pinned down, Wellman was hesitant to be interviewed. Drawing upon Wellman’s method of writing, interviewer Helen Shaw mischievously structured their conversation to cajole and provoke Wellman, enlisting the full audience as her co-conspirators in asking him questions. With the support of his community – and a glass of white wine – Wellman opened up, sharing stories of his maturation as a playwright and offering a glimpse into his writing process.

The Flea continues to honor Mac Wellman’s work with Perfect Catastrophes, A Festival of Plays running now through November 1, Thursdays through Mondays at 7 p.m. and 9 p.m., with Sunday matinees at 3 p.m. and 5 p.m. Tickets start at $37. Perfect Catastrophes features plays Sincerity Forever, Bad Penny, the world premiere of The Invention of Tragedy, The Sandalwood Box and the world premiere of The Fez.